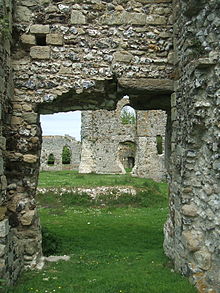 The ruins of the Lewes Monastery

The monastery Lewes was a cluniazensisches Priory in Lewes in the county of East Sussex , England . In the 12th and 13th centuries it was an important monastery complex in England, with one of the largest monastery churches in the country. Today only ruins remain, which are accessible to visitors in a park.

The earliest Cluniac settlement in England was established in Lewes as St. Pancras Priory . The monastery was founded by William de Warenne and his first wife Gundrara, probably in 1081, after they both visited Cluny Abbey in Burgundy in 1077 . The dedication of the monastery was based on a Saxon shrine that previously existed on the site. The Pankratius -Kult was considered an important reference point of the Saxon England to Rome, since he of 597 Augustine of Canterbury on behalf of Gregory the Great had been introduced. William de Warenne acted under the auspices of a Cluniac Pope, Gregory VII.

The monastery was located within an extensive, walled complex in the south of the city of Lewes, in the valley of the Ouse . The house prospered, and in the 13th century up to 60 monks and an unknown number of lay people lived in the complex. Lewes had subsidiaries, for example at Castle Acre and Thetford in Norfolk , or Southend-on-Sea in Essex, and had churches and extensive estates throughout England. It maintained two hospices in Lewes itself.

In the Battle of Lewes in 1264, King Henry III sought . Refuge with his troops in the monastery district, but was also harassed there by the troops of Simon de Montfort . Heinrich was forced to agree to the establishment of a council of state in the Lewes agreement . For the monastery, this episode meant a collapse in its economic efficiency. Despite its importance in the High Middle Ages, little remains of the monastery complex today, as the buildings were systematically demolished under Henry VIII in the course of the dissolution of the English monasteries . In November 1537 the priory fell to the English king, who commissioned his secretary Thomas Cromwell to destroy the complex. Cromwell left the prior's quarters and expanded it into a house for his son Gregory Cromwell . The church buildings were completely demolished by an Italian engineer, and a knot garden was created in their place .

In 1845 a railway line (the London, Brighton and South Coast Railway ) was pulled through the site. The low-lying railway line separates the former monastery area into two parts that are still visible today. During this work, the foundations of the chapter house and the apse of the old monastery church were severed and largely destroyed. But the material found stimulated archaeological research. Among other things, the graves of William de Warenne and Gundrada were uncovered. Finds from this period are now kept in two museums in Lewes and the British Museum . In the following decades archaeologists and historians examined the facility. The floor plan known today was drawn in 1906 by the architect Sir Harold Brakspear on the basis of structural remains and written records. Later excavations made the plan more precise, but not fundamentally called into question.

Location of the monastery area

The Mount with surrounding wall

The scope of the monastery area is determined by landscape and structural elements. It forms a square of around 16 hectares, 520 meters from west to east and 310 meters from north to south. In terms of its size, the area was comparable to that of the fortified town of Lewes on the hill to the north. To what extent the location of the monastery was based on the landscape is difficult to see today, as the floodplains of the Ouse in the south are now drained. In the Middle Ages, the south side of the area bordered directly on the Cockshut River . It was navigable from here to the Ouse, and thus into the English Channel . The monastery could be reached and attacked from the sea and was therefore completely surrounded by a wall.

The area slopes down to the south in terraces. The monastery buildings were in the western half. The church stood in the northwest. In the Northeast Quadrant is a 15 meter high Landaufschüttung, known as The Mount (the mountain), and a deep area, known as Dripping Pan ( drip pan ). The age and the exact function of both man-made landscape objects have not been clarified beyond doubt. They seem to date from the time of the monastery and could have been used to extract salt . The mountain would have been a suitable vantage point over the valley of the Ouse in the Middle Ages, important for the defense of the monastery, or with a beacon for navigation on the river. 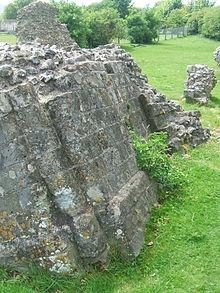 Remnants of the infirmary

Limestone was brought in from the Isle of Wight for the church and farm buildings, later also imported from Normandy . Sussex marble was used for jewelry work such as on the large abbey church . The monastery had its own stonemasonry and painting school which carried out work across Sussex.

The first church building on the site was a stone replica of a Saxon wooden church. Its remains could be identical to the one-room structure of the chapel of the infirmary , of which the foundation walls and the altar have been preserved. The large monastery church of St. Pancras was built after 1140, with the west towers being described as unfinished in 1268. No aboveground ruins have survived from her. Its ground plan was based on the mother monastery of Cluny, more precisely on the Abbey Church of Cluny III , the largest church in the world at the time. The church in the daughter house in Castle Acre followed the same structural model . Lewes Abbey Church was the largest church in Sussex at 128 meters long and 32 meters above the crossing , longer than Chichester Cathedral .

Directly to the south of the church were the cloister and chapter house . From the dormitory , necessarium , refectory and the Infirmatorium that were in the south and east, as well as the rooms of the Priors and the entrance gates to the west parts are above ground survived.

The ruins of the monastery are now in Priory Park . In 2009, the Heritage Lottery Fund financed the renovation of the remaining building structure, free public access to the facility and the erection of information boards. A large metal sculpture in the form of a knight's helmet (erected in 1964) commemorates the Battle of Lewis. Much of the rest of the monastery area, such as the Dripping Pan , is used as sports and leisure facilities.