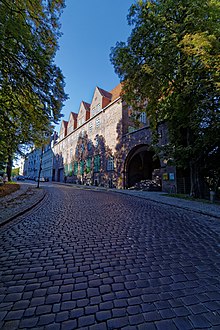 State central bank building in Flensburg in Nordergraben from the street. (2015) 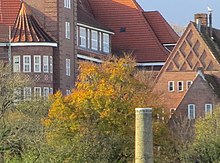 The two gables on the right belong to the state central bank building. (Right: brick building parts of the old grammar school.)

In 1922/23 the government master builder a. D. Grantz built the building in Nordergraben, directly on the western slope , for the Reichsbank Directorate Berlin as a branch of the Reichsbank . Visually matching the neighboring old grammar school , which was built between 1912 and 1914 , the building was also made of red brick . On the street side, it is three-story. On the back it appears to be six-story due to the steep slope of the property. On the left side of the street there is a driveway and a stairway to Lilienstraße , which in turn leads to Marienstraße . The main entrance is on the right side of the street front in an extension with a vestibule and a staircase. After the Second World War and the subsequent currency reform , the building served as the state central bank . On October 9, 1987, the state central bank moved to a large, modern building in Waitzstrasse ( location ). During the introduction of the euro from 1 January to 30 June 2002, there million DM bill: DM coins and Euros exchanged. In 2009 it was finally decided to close the Flensburg branch, so that it finally closed on September 28, 2012. In 2015 the branches in Kiel and Lübeck were also closed, which means that the Bundesbank left Schleswig-Holstein. Accounts have been set up in the Hamburg branch for the Schleswig-Holstein area (see Deutsche Bundesbank's bank locations ). 54.781193 9.440531

The building in the Nordergraben has recently been placed under monument protection for historical, artistic and urban planning reasons . The state central bank building originally contained bank rooms, offices, cash desks and official apartments, including a caretaker's apartment. Nowadays it serves as an office building, and nowadays there is a branch of the security service provider Prosegur .