from Wikipedia, the free encyclopedia
This is the spotted version , flagged on December 26, 2020 . There is 1 pending change that has yet to be viewed. 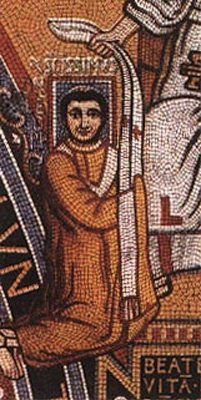 Leo III. on a mosaic in the triclinium of the Lateran Palace (around 799)

The fresco justification or the oath of Leo III. in the Stanza dell'incendio di Borgo by Raphael , 1514–1517 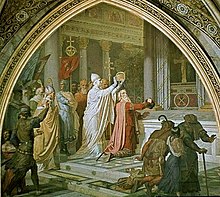 Leo did not come from the Roman nobility and had worked his way up the church hierarchy . Before being elected, he was presbyter in Santa Susanna .

His papal name means "the lion" ( Latin ). Since his predecessor in office, Hadrian I, had established good relations between Rome and the Frankish Empire , Leo III sent. after his election the keys to the tomb of St. Peter as a sign of an oath of allegiance to King Charlemagne . This was awarded the office of patricius Romanorum and he was thus the patron of Rome .

The family of his predecessor Hadrian, who had collected lucrative offices under his pontificate, were hostile to Leo. When on April 25, 799, the feast of St. Marcus , on the Litania Maior procession , his opponents (Optimates) apparently threw him from his horse and tried to blind him and cut off his tongue. He was taken to a nearby monastery by the attackers around Hadrian's nephews, Paschalis and Campulus, from which he managed to escape with the help of his servants. With the help of Franconian greats he came to Paderborn , where at that time Charlemagne was staying, who was in another war against the Saxons . Karl sent for Leo's opponent and listened to them. In Paderborn, however, there was no decision, and the Pope was sent back to Rome with Franconian Missi (among them Archbishop Richulf of Mainz ), because the allegations and the arrest of the Pope were to be clarified on the spot. However, when these investigations did not progress there, Karl decided to move to Rome in 800 and take matters into his own hands. (The coronation of the emperor may have already been discussed in Paderborn, as the best solution to clarify the allegations against Pope Leo III.)

In Rome none of the opponents of the Pope against Leo III. Provide sufficient evidence and there was no conviction of Leo for adultery. Leo III. however, had to prove his innocence by taking an oath of cleansing on December 23, 800. During the Christmas mass on December 25, 800, Leo crowned Charlemagne emperor . Allegedly this happened against Karl's will, which is only an ahistorical construction, because Karl had deliberately aimed for the coronation of the emperor. This was the foundation for the western medieval empire . Constantinople saw this act as usurpation , but Irene was too weak domestically to take action against Karl. A few days later, Karl held court over the Pope's opponents for crimes of majesty. He sentenced her to death. At the request of Pope Leo, however, they were pardoned to live in exile . After Leo's death, however, they returned to Rome.

At the imperial coronation of Ludwig the Pious in Aachen in 813 Leo was not present. Apparently he did not want to fully recognize the power of the Frankish emperors over Rome. Leo died on June 12, 816. The day of his death is also his liturgical day of remembrance. 1673 Pope Leo III. canonized by Pope Clement X.