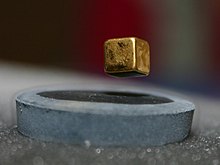 Levitation ( Latin levitas = lightness) describes the free floating of an object. For this purpose, the acting weight is compensated with the help of a force and an object is positioned in the room, with no direct contact with the floor or solid objects. Some methods require a gaseous medium (e.g. air) to transmit power, which must be around the object.

Levitation of an object can be achieved, for example, by blowing air against the object , as in air hockey . It is used in bodyflying in parachuting training . Alternatively, air can be pushed down from the object. This principle is used in a hovercraft , which allows the vehicle to float on an air cushion.

a – c: several objects are held independently d – e: the system also works overhead; f: Objects can be rotated with levitors placed slightly to the side

On the verge of acoustic levitation, the ultrasonic air bearing, which is caused by the near field effect in the ultrasonic field, counts . It is primarily used for transporting and gripping flat objects. 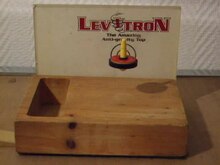 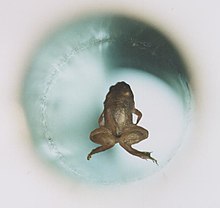 Electric and magnetic forces enable real levitation, i.e. levitation that does not require any mechanical contact: Bodies can repel one another depending on their charge or polarity, and so the force of gravity can be balanced. However, there are practical problems with this method, because Earnshaw's theorem states that static fields , such as those of normal permanent magnets , cannot create stable equilibrium positions . So at best you can manage to let one permanent magnet hover briefly over another, but even the smallest disturbances (wind, vibrations) cause it to crash. However, there are several ways to still create stable levitation.

A magnetic top can levitate in a static field, because its gyroscopic movement aligns itself with a disturbance in such a way that stability is maintained.

If the position of the body to be levitated is recorded by sensors , control loops can adjust the field so that disturbances are compensated. This process can be implemented with various methods, it is currently the only one that has been used on a larger scale beyond a toy scale, best known for magnetic levitation trains . Magnetic floating couplings are commercially available for scales with which z. B. a sample located in a vacuum vessel can be weighed from the outside through a stainless steel wall.

Diamagnetic substances are repelled by magnetic poles - both north and south poles. As a result, the potential field looks different for them, the Earnshaw theorem does not apply, and there are stable equilibrium positions. Graphite plates, for example, can float above permanent magnets; with sufficiently strong ambient fields, even small permanent magnets can be kept floating between human fingers (which are also diamagnetic). Superconductors are perfectly diamagnetic; they can be used to achieve particularly impressive floating effects.

Eddy currents are induced in a conductor by the alternating magnetic field . This creates the magnetic field that is directed opposite to the field of the magnet. Normal conductors such as copper or aluminum behave like diamagnetic substances. The following solutions are practicable as a possible arrangement of conductors and magnets to one another: 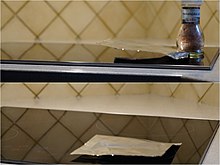 An aluminum foil that floats above the induction hotplate thanks to the eddy currents induced in it.

In optical levitation, mass particles are made to float using laser light. This happens via the impulses of the photons , the radiation pressure , which counteract the weight . A sufficiently high intensity of the laser beam is required for this . For objects a few µm in size - in the earth's gravitational field - lasers of the order of 1 watt are required. The optical tweezers are an example of this methodology.