List of rulers in the 17th century BC Chr.

This is a synchronous representation of the reigns of pre-ancient rulers in the 17th century BC , visualized in the form of equally scaled timelines.

The dates follow medium chronology and are neither certain nor final nor complete. Please note general information!

Approximate areas of influence around 1700 ... 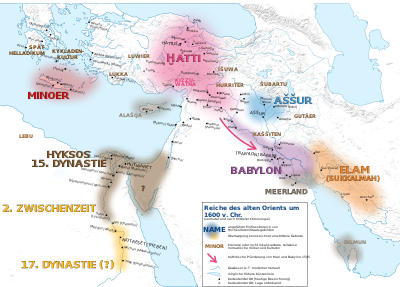 For a more detailed breakdown of the rulers during the Second Intermediate Period of Ancient Egypt, see List of Kings of the 14th Dynasty .

The Hittite ruler Muršili I was a contemporary of the Šamšu-ditana in Babylon whom he attacked .

The Assyrian ruler Adasi was a presumed contemporary of the semi-mythical Gandaš . Its Kassite dynasty later conquered and ruled Babylonia.

For the period 1700-1600 BC, there are further details about rulers that are not listed here for various reasons. These include mythical ancestral kings, but also rulers, who cannot be precisely fixed in time. See for example the lists of the kings of Ireland , Byblos , Argos , Sikyon , Korea , as well as the Xia dynasty and the Shang dynasty . The kings of Elam are only partially reproduced here, as there are insufficient dating possibilities.

Deputies and viceroys are only listed here if the territory they administer formed an independent state before or afterwards.

In the timeline, a gap of one year symbolizes that the transition between two rulers will be assumed around this time. If the transition period can be determined more precisely, this is indicated by a thinner line. Larger gaps between two names do not necessarily mean that there was no ruler; but indicate an uncertainty. If no colored bars are displayed, the relevant rulers cannot be dated more precisely according to the latest research. The representation does not claim to be complete.

General note: Due to the problems with ancient oriental and Egyptian chronology, the information in this list has not been finalized. This is based on the Middle Chronology , which is commonly used as a convention among ancient orientalists. Specialist authors usually state which assumptions / chronologies their writings are based on: Depending on the opinion, the dating of great kings and pharaohs can be in the period before the 14th century BC. By several decades from the information used here.

Due to new archaeological findings, the state of research and current doctrine on dating can occasionally change abruptly. If more recent findings are incorporated, the simultaneity of rulers must be checked (this should be guaranteed according to archaeological evidence) and the chronology used and the source / place of discovery must be indicated.