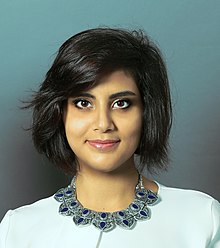 Loujain al-Hathloul ( Arabic لجين الهذلول Ludschain al-Hadhlul , DMG Luǧain al-Haḏlūl ; born July 31, 1989 ) is a Saudi Arabian women's rights activist . She waskidnapped by Saudi Arabian security forcesin Dubai , taken to Saudi Arabia and arrested there in May 2018. Her family and various human rights organizations have alleged torture. In 2020 she was sentenced by a Saudi Arabian court to around six years in prison for disturbing public order . In February 2021 she was released from prison and given a five-year ban on leaving the country.

Al-Hathloul graduated from the Canadian University of British Columbia .

For her activism, she used social media successfully from the start . Among other things, she campaigned for the lifting of the driving ban for women in Saudi Arabia and for an end to the legal guardianship of women by men.

In September 2014, she and 14,000 other people signed a petition calling for King Salman to end legal guardianship of women by men. On December 1, 2014, she was detained for 73 days when she tried to drive her car across the United Arab Emirates border into Saudi Arabia, violating the women's driving ban. On June 4, 2017, she was arrested at Dammam Airport and denied contact with her family and an attorney's defense.

In March 2018, vehicles belonging to Saudi Arabian security forces stopped her car on a highway in the United Arab Emirates where she was for a master’s degree. She was handcuffed and driven to an airport. She was flown to Saudi Arabia in a private jet, where she was jailed for a few days.

On the evening of May 15, 2018, she was arrested again along with Eman al-Nafjan, Aisha al-Mana, Aziza al-Yousef, Madeha al-Ajroush and some men who campaigned for women's rights in Saudi Arabia. Human Rights Watch said the purpose of the arrest was "to intimidate anyone who is skeptical about the prince's agenda" (by "prince" is meant Mohammed bin Salman ). According to her closest relatives, she was held in solitary confinement and tortured after being arrested. She was subjected to waterboarding , beatings, lashes and electric shocks , as well as sexually harassed and threatened with rape and murder.

Women have been allowed to drive in Saudi Arabia since June 2018. Even so, al-Hathloul and other activists remained in prison during this time.

On September 15, 2020, 29 countries, mostly western countries including Germany, called on Saudi Arabia to release the imprisoned al-Hathloul along with four other imprisoned women who advocate women's driving.

On October 8, 2020, the European Parliament called on Saudi Arabia to release all human rights defenders, particularly women activists including al-Hathloul, in a resolution passed against the kingdom's human rights abuses. The MPs emphasized the situation of these dissidents and migrants in the country's prisons and called on the states of the European Union to reduce their representation at the Saudi Arabian G20 summit.

At the end of October 2020, al-Hathloul started a hunger strike in order to get regular visits to the prison again. On November 10, 2020, the Saudi Arabian ambassador to Great Britain said his country was considering releasing al-Hatloul before the G20 summit that same month. The decision was considered after international political pressure to release her as she was on a week-long hunger strike.

In November 2020, after the end of the G20 summit in Riyadh , al-Hathloul was charged with campaigning for women's rights , participating in international conferences on the human rights situation in Saudi Arabia and having been in contact with European diplomats. On November 29, 2020, seven European envoys issued a joint statement condemning the continued detention of five women's rights activists, including al-Hathloul, whose case had been referred to a special court for terrorist offenses. The ambassadors of the Netherlands, Germany, Great Britain, Estonia, Finland, Sweden and Luxembourg demanded the release of al-Hathloul.

In December 2020, she was finally sentenced to five years and eight months in prison on a rushed trial. In February 2021, she was released from prison and given a five-year ban on leaving the country.

Loujain al-Hathloul was with Fahad al-Butairi (Arabic: فهد البتيري) married to a Saudi Arabian comedian and actor. Al-Butairi became the first comedian to appear professionally on the stage in Saudi Arabia and the Gulf States after the tough laws against criticism of certain aspects of Saudi society were relaxed. He was also known on YouTube . He was arrested in Jordan in March 2018 . He was handcuffed and blindfolded on a plane to Saudi Arabia. There he is said to have been forced to divorce by the authorities.

On February 5, 2019, the City Council of Mannheim decided to award al-Hathloul with the city's Bertha and Carl Benz Prize 2019; because of her imprisonment, she was unable to receive the award. At the rescheduled handover event on September 20, 2020 in Mannheim, she was represented by her sister Lina al-Hathloul, who was connected live from Brussels . The event was broadcast on the Internet in German, English and Arabic.

In 2015, Arabian Business Magazine voted her third in the Top 100 Most Powerful Arab Women 2015 . In March 2019, PEN America al-Hathloul, Nouf Abdulaziz and Eman al-Nafjan presented the 2019 PEN America / Barbey Freedom to Write Award . Al-Hathloul was named one of the 100 Most Influential People of 2019 by Time magazine .