Magha Puja ( Thai วัน มาฆบูชา , RTGS : Wan Makha Bucha ; Khmer មាឃបូជា , Meak Bochea ; Laotian ມະ ຄະ ບູ ຊາ , Makha Busa ) is a holiday of Theravada - Buddhists in Thailand , Laos ', Sri Lanka , Myanmar and Cambodia . The day is intended to commemorate a spontaneous gathering of 1,250 disciples of the Buddha who had come together to hear the Buddha preach. This day always falls on the full moon day of the third lunar month in the traditional Thai calendar (late February or early March), so it takes place on a different date each year.

The name is composed of Māgha ( Pali : name of the third lunar month) and Pūjā (Pali: to worship), so Māgha Pūjā is a day for worshiping the Buddha and his teaching on the full moon day of the third month.

The origin of the festival goes back to the legend about a spontaneous meeting of 1,250 monks. They all decided independently of one another to seek out the Buddha who at that time lived in the bamboo grove (Weluwan forest) near Rājagṛha (in the historical kingdom of Magadha ). Of the 1,250 monks, 1,000 were enlightened ( arhat ) who had previously been ordained by the Buddha himself. The other 250 were disciples of the elders Moggallana and Sariputta. Other sources speak of 1,250 enlightened monks.

According to legend, the Buddha used the Māgha full moon day in the last year of his life to announce that he would die within three months.

It is not clear when the Māgha-Pūjā holiday was first observed. In a list of religious ceremonies published within a year by the Siamese King Chulalongkorn (Rama V) , it is mentioned that his father King Mongkut (Rama IV) also held a ceremony for the founding of the Thammayut Nikaya order Makha Bucha Day was celebrated at Wat Phra Sri Rattana Satsadaram (today: Wat Phra Kaeo ). The holiday was first celebrated in Siam, probably in 1851, and was later recognized as a public religious holiday throughout the kingdom.

On this day of the full moon of the third month, the Buddha held his "Ovada-Patimokkha Gatha", the Patimokkha exhortations, in front of the assembled monks .

Although some sections of the "Patimokkha Exhortations" are directed primarily at the ordained monks, they also apply to the Buddhist laity. Laypeople can use these pointers as a basis for living in harmony with the Buddha's (Dhamma) instructions. Ajahn Lee Dhammadharo summarized these guidelines under six headings:

“Wian thian” in a temple in Chiang Mai 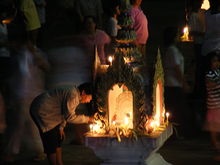 The Makha Bucha celebration (in Thai : จัด งาน วัน มาฆบูชา - "Chat Ngan Wan Makha Bucha") is celebrated by devout Buddhists with religious activities such as giving gifts to the monks ("tak baat" - ตักบาตร ) and / or listening to a monk's sermon ( ฟัง เทศน์ - "fang thet"). After dark, the monks lead the believers to a candle procession ( เวียนเทียน - “wian thian”), where the “ Chedi ”, the “ Ubosot ” building or a Buddha statue is triple circled. Both the monks and the believers carry the triple offerings : a burning candle, three burning incense sticks and a wreath of flowers or a fresh blossom. Through the multiple “trinity” one should reflect on the three jewels of Buddhism : Buddha , his teaching ( Dharma ) and the monastic community ( Sangha ).

In Bangkok in the evening a religious ceremony will be held under the direction of King Bhumibol Adulyadej at Wat Phra Kaeo . The king will then lead the candle procession around the bot, in which more than 100 people regularly take part.

On the grounds of the Dhammakaya Foundation, not far from Bangkok, thousands of monks, hundreds of thousands of Buddhist laypeople, gather for a common meditation with guests from all over the world.

Celebrate in other countries

For Makha Bucha Day on March 3, 2007, a reading of all 84,000 chapters of the Thai Tripitaka was held at the Sanam Luang in Bangkok . Another occasion was the 80th birthday of King Bhumibol Adulyadej this year. The reading from the 45 books of the 100-year-old Thai Tripitaka was given non-stop by Thai monks and lay people for seven days and nights. A last existing version of the Tripitaka, published by King Prajadhipok (Rama VII) , was also exhibited at Wat Bangkradee ( Bang Bon District ). The lecture was the first of its kind in the 800-year history of Buddhism in Thailand . He should bring "tremendous religious merit" to the whole country.