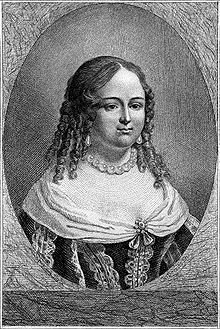 The life of Madame de Villedieu is only partially known. The comprehensive document studies by the researcher Micheline Cuénin are decisive for its presentation . There are also numerous contemporary, not always reliable reports about Villedieu, in particular that of the French writer Gédéon Tallemant des Réaux in his Historiettes , a collection of biographies of prominent fellow citizens. A number of works wrongly ascribed to Villedieu must also be excluded.

Marie-Catherine Desjardins came from a small noble family. She was the second daughter of Guillaume Desjardins and Catherine Ferrand. Her parents had been married since 1637 and her mother served as the maid of the Duke Henri de Rohan-Montbazon's wife. Thanks to the Duke's mediation, Guillaume Desjardins got a job in Alençon, where he moved with his family. Marie-Catherine grew up here too. There is no information about their childhood or early education. It is unlikely, however, that she received any higher education as a member of the lower provincial aristocracy. As a young girl, she fell in love with her cousin François Desjardins de Saint-Val in 1655 and wanted to secretly marry him, but her father was very angry about this and brought the marriage project down through a lawsuit against the cousin. Her mother then divorced and moved to Paris with her two daughters. There she could stand financially on her own two feet.

In Paris, Marie-Catherine Desjardins made the acquaintance of noble ladies whom her mother served and won them as patrons because of their spirit and wit. At that time she probably began to write her first poems and, although not yet of legal age, was able to live relatively independently and increasingly independent of her mother.

Around 1658 the then 18-year-old Desjardins found her great love in the 26-year-old lieutenant of a regiment of the picardy , Antoine de Boësset, Sieur de Villedieu, son of a well-known, formerly in the service of the French King Louis XIII. standing composer. For her, the relationship was probably the impetus for writing the sonnet Jouissance (1659), which earned her her first literary fame and appeared in a Paris magazine . However, this was also criticized as scandalously erotic for a woman as the author, since it openly glorified the protagonist's sexual pleasure. In 1660 Desjardins had her then widely read Récit en prose et en vers de la farce des Précieuses published, a report on the premiere of Molière's one-act comedy Les Précieuses ridicules in Paris in November 1659 . After an imprecise version of her report had first been circulated, which was not approved by her, Desjardins chose the publisher Claude Barbin as editor of an authorized edition , who would also publish many of her subsequent works.

Desjardins' novel Alcidamie (1661) remained unfinished, perhaps due to pressure from Marguerite de Rohan , whose alleged attempt to get rid of her brother in order to become the sole family heir is alluded to in this novel. The next year Desjardins successfully published a collection of her previous poems ( Recueil de poésies de Mademoiselle Desjardins ). Also in 1662 she wrote her first play, the tragic comedy Manlius Torquatus , which was performed in April of the same year by actors from the theater company Hôtel de Bourgogne and found recognition. The same actors also took over the performance of Desjardins' less successful drama Nitétis in 1663 , the subject of which was borrowed from the novel Artamène ou le Grand Cyrus by the French writer Madeleine de Scudéry . In October 1663 Desjardins was invited to Versailles for a meeting with the "Sun King" Louis XIV . For the first rehearsals for the staging of her third and final play, the tragicomedy Le favory , the author won the Molières company in early 1664.

Meanwhile, Desjardins' relationship with Boësset was not going smoothly. When he got sick, she nursed him and made him promise to marry. But Boësset soon looked for other loves and forced Desjardins to sign a declaration in 1663 that he had never given her a marriage vow. For her, however, the relationship was obviously far from cold, because when Boësset set out on a dangerous military mission that was to take him outside of France, she traveled to Provence after him. The liaison was renewed and on June 21, 1664 Boësset again made a promise of marriage to a lawyer, which he did not want to keep after his return.

Despite this disappointment, Desjardins used to call herself Madame de Villedieu from 1664 and wanted to be listed under this name, as she asked Molière, at the presentation of her play Le favory , which premiered in April 1665 . She was the first woman to be honored that her play was used to entertain the king during a gala performance. This took place on June 13, 1665 in the presence of Louis XIV in Versailles. Thereupon Desjardins was promised a pension requested by Foreign Minister Hugues de Lionne and approved by the King, but was only paid out in half from 1676.

After Madame de Villedieu renounced all marriage promises on the part of Boësset in February 1667, Boësset married a wealthier woman, a young widow. In March 1667, the scorned and financially distressed writer traveled to what is now the Netherlands and Belgium because of a pending property lawsuit . There she was warmly received in aristocratic circles and met the Dutch poet Constantijn Huygens , the father of the well-known astronomer Christiaan Huygens , in The Hague . In the meantime Boësset , who took part in the war of devolution , had sold his former lover's love letters to her publisher Barbin, who published them despite Villedieu's resistance. When Villedieu cured her ailing health in the famous spa Spa , not only did her father Guillaume Desjardins die, but Boësset also lost his life in August 1667 during the siege of the northern French city of Lille . After all, the deceased's family did not mind that they continued to use the name Villedieu.

For some time, Villedieu probably lived with her friend Marie de Longueville, Duchess of Nemours, whose patronage she had enjoyed since the performance of Le favory and to whom she dedicated the shepherd novel Carmente, histoire grecque in 1668 . As early as 1667 she wrote the short novel Anaxandre for her Belgian critics, who rejected her because of her permissive literary content, which was supposed to bring them closer to her fate in the form of a fictional autobiography.

In 1668 Villedieu set foot on French soil again and returned to Paris. She was still in a difficult financial situation, although she was literary famous and otherwise supported by prominent sponsors. She had her numerous letters, which she had written to friends from Holland, published by Barbin as Recueil de [quelques] lettres ou relations galantes , as well as her novella Cléonice ou le roman galant, first edited in 1669 under the author's name Madame de Villedieu .

In her financial need, Villedieu found herself prepared to write a lot and to take up the - often rapidly changing - interest of an elitist readership in response to the demands of her publisher Barbin, who was primarily interested in commercial success. She wrote a third of her complete works in the relatively short period from 1669 to 1672, almost entirely novels and short stories.

In 1669 Villedieu revised the first two volumes of a manuscript in Barbin's possession, Le Journal amoureux , to which the author of the original text objected and himself published the third and fourth volumes. Villedieu distanced himself from its slippery content in the preface to her second edition of 1671, in which year she also completed the fifth and sixth volumes. In the previous year she had already worked on the anonymously published Annales galantes . While the plot of the historical novel Le Journal amoureux , set in 16th century France, is still completely fictional, the stories of the Annales galantes are woven around real historical personalities and events. According to modern literary critics, with these works she created a new genre of the French novel, the nouvelle galante .

Villedieu generally presents strong, decidedly female protagonists in her works. Personalities portrayed in their historical novels are often based on real models. While official historiography was usually content with recording the history of events, especially the military and political achievements of great men, Villedieu sought to fathom the underlying causes of the historical events and attributed them almost exclusively to the emotional, often amorous motives of the people involved . For the - private as well as political - deeds of men and women, it is primarily their emotions and passions that are decisive, not reason and free will. But if the public actions of powerful men are rooted in their love affairs, women too have great influence on political history. Villedieu sometimes describes politically ambitious women who seek to satisfy their striving for power through erotic intrigues. A feminist element is therefore mixed up in Villedieu's view of history.

In rapid succession, Villedieu wrote other works, including the fictional autobiography Mémoires de la vie de Henriette-Sylvie de Molière (1672–1674), in which she skillfully combines real events in her life with fictional adventures. In it she portrays an independent, non-conformist young woman from contemporary France who finally finds love in marriage. She chose exotic locations for the action in the books Les Galanteries grenadines and Les Nouvelles africaines , published in 1673 .

At the height of her literary fame, Villedieu retired to a monastery in 1672 , which she left the next year, after which she returned to Paris. Now she went back to her literary activity, but not nearly as intensely as in the period from 1669 to 1672. With the work Le Portefeuille , which was published in her Œuvres mêlées in 1674 , she developed her storytelling into a moral novel . The last work published before her death was the short story collection Les Désordres de l'amour (1675), which was highly praised by contemporary literary critics.

In 1676, Louis XIV finally had the long-promised pension paid out to the writer. With this he officially recognized her contribution to French literature. On August 17, 1677, she entered into a marriage of convenience with Claude-Nicolas de Caste , Sieur de Chalon, who was almost 20 years her senior , and to whom she gave birth to a son Louis on June 30, 1678 , probably also for her further financial security . Her husband died unexpectedly on January 5, 1679. As a widow, she also received a modest pension from the king for her underage son. She also received the inheritance from her father-in-law, which had actually been bequeathed to her husband. She spent the last three years of her life with her son with her mother, sister and brother on the Clinchemore family estate, where she died on October 20, 1683 at the age of about 43.

In Villedieu's literary legacy, her publisher Barbin found two manuscripts that he had published after her death as Portrait des faiblesses humaines (1685) and Annales galantes de Grèce (1687). In the first work, which was probably created after 1675, the writer, who is apparently interested in moral instruction, calls on people to overcome human weaknesses.

Madame de Villedieu's books were very popular long after her death; their complete works were published in 1702, 1720 and 1741. Interest in it continued into the 18th century, when it disappeared after the French Revolution . It was not an isolated case, because many French poets were hardly read from this time on. After preliminary work by Bruce Morrissette , Micheline Cuénin published her two-volume, highly scientific work Roman et société sous Louis XIV: Madame de Villedieu (Marie-Catherine Desjardins 1640-1683) in 1979 , which wanted to make the long-forgotten writer better known again as well as her life and work embedded in 17th century French history. In fact, Villedieu is now enjoying increased literary popularity again.