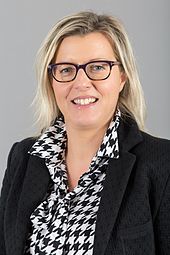 Marion Rosin (born June 9, 1969 in Jena ) is a German educator and politician . She was a member of the Thuringian State Parliament from 2014 to 2019 , initially for the SPD ; after her faction change then from 2017 until she left the state parliament for the CDU .

Marion Rosin attended the POS "Bertolt Brecht" in Camburg from 1976 to 1986 and in 1988 passed the Abitur at the EOS "Johannes R. Becher" in Jena. She then worked briefly as an educator in the after-school care center at POS Stiebritz / Jena. She studied from 1989 to 1991 at the Institute for Teacher Training in Crossen an der Elster and then went on to study at the University of Education in Erfurt , which she completed in 1995 with the first state examination for primary school teaching for sport and German. In the same place followed a postgraduate course in educational sciences, which she completed in 1997 as a qualified pedagogue with a focus on adult, industrial and environmental education.

From October 1997 to December 1998, Rosin completed an internship at the regional editorial office of the Thüringer Allgemeine in Erfurt, where she was also employed as a freelancer. From January to December 1999 she worked as a press officer for the Thuringian parliamentary group of the SPD. From January 2000 to July 2002 she was managing director of the regional office of the Naturfreundejugend Thuringia based in Erfurt. Then she continued her educational training. From August 2002 to August 2003 she completed the preparatory service for the teaching post in elementary school and secondary level I at the Saarbrücken State Study Seminar and from September 2003 to August 2004 the preparatory service in Thuringia at the State Study Seminar Erfurt.

Since 2004 Rosin has been employed as a primary school teacher in the Thuringian state service. From 2012 until the acceptance of the mandate in 2014, she worked as headmistress of the state primary school “Geschwister Scholl” in Arnstadt .

Rosin is married to Richard Dewes and has two children. She lives in Bechstedt in the Schwarzatal .