The Mews shipyard was a boat and cutter yard in Cuxhaven , which existed from 1945 to 1978 and mainly built and repaired börteboats and cutters for fishing.

When Cuxhaven was annexed by Hamburg to the Prussian province of Hanover with the Greater Hamburg Law in 1937, the new fishing port was built by 1939 . On the east side of the Schleusenpriel three shipyards settled between 1938 and 1945, which made a name for themselves as “Kutterwerft”: The first in 1938 the Böhmewerft , after the Second World War in 1945 the Mews shipyard and the Döscher shipyard .

History of the Mews shipyard

The founder of the shipyard, Wilhelm Mews, set up his new business in autumn 1945 on the east side of the New Fishery Harbor in today's Kapitän-Alexander-Straße 11. The shipyard concentrated on the construction of ships and boats in wooden construction: the main field of activity of the small company was the construction and repairs of boats and cutters from the fishing industry.

Until the end of the shipyard operations, the Mews shipyard remained connected to wooden shipbuilding. The (probably) last new building with the construction number 104 from 1978 was a wooden cutter - at that time christened "Helene", today still in operation with the name "Goedeke Michel". In 1978 the Mews shipyard ceased operations. Two years later, the Cuxhaven company Empting / Glüsing took over the business. 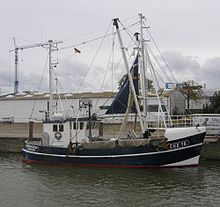 Newbuildings of the shipyard (selection)

A construction list of the Mews shipyard does not yet exist in the literature - an approximation by year of construction:

Site of the former Mews shipyard, today the location of the Cuxhaven boat and shipyard

The successor to the company is now the “Boots- und Schiffswerft Cuxhaven GmbH”, which belongs to the Plambeck Holding, and operates at the same address. She continues to be active in boat building with a focus on repairs and as a maritime service provider.