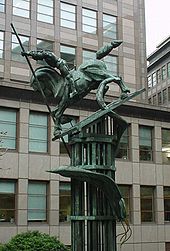 Michael Sandle (born May 18, 1936 in Weymouth , Dorset , Great Britain ) is a British sculptor and German university professor. He is considered an important representative of contemporary sculpture. Sandle lives and works in London , England .

Michael Sandle studied from 1951 to 1954 at the Douglas School of Art and Technology on the Isle of Man , he completed his military service at the Royal Artillery until 1956. During this time he attended evening classes at Chester College of Art. From 1956 to 1959 he studied Graphic techniques at the Slade School of Fine Art in London with Anthony Gross , Lynton Lamb and Ceri Richards , also with Andrew Forge , Lucian Freud and Claude Rogers . He went on study trips across Europe on a French grant.

Sandle lived in Canada from 1970 to 1973 . He was visiting professor at the University of Calgary in Alberta until 1971 and at the University of British Columbia (1971 to 1972). In 1973 he moved to Germany and from 1980 to 1999 was head of the plastics institute and a sculpture class at the State Academy of Fine Arts in Karlsruhe .

Michael Sandle was a participant in the Paris Biennale in 1967 and in 1968 with a sculpture in the 4th documenta in Kassel . Michael Sandle has been a member of the German Association of Artists since 1973 . He was appointed Royal Academician in 1989.