The rental villa Bruno Hörning is located in the Oberlößnitz district of the Saxon city of Radebeul , at Wettinstraße 9. It was built in 1894 by the builder Adolf Neumann for the client Bruno Hörning. 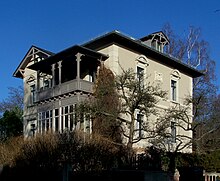 The two-storey, together with a plastic on the south wall by conservation standing rental villa stands on a basement floor as a pedestal of rubble; On top of the building is a slate-covered, flattened hipped roof . On the back of the building, on the northeast-facing side, there is a two-storey side wing with a flat roof .

In the main view of the apartment building is located on the eastern side of the road is to the left of the middle of a side projection with a low-pitched gable rafter, before by right arising reserve is a now two-story, wooden porch . In the north (left) side view, the entrance is above a flight of stairs . In the right side view there is a sculpture in a wall niche .

The plastered building is structured by corner blocks and cornices . The windows are framed by sandstone walls and protected by window roofs , on the upper floor as different gable roofs. In addition, there are parapet panels and stucco decor.

The property is fenced in by means of wooden fencing between sandstone pillars.

The Niederlößnitz master builder Adolf Neumann built a rental villa for two parties for the client Bruno Hörning in 1894. In 1904 the originally single-storey, open veranda was increased.

In particular, Hörning initiated the expansion and lock-up of the roads, the establishment of a savings bank association, the participation of the community in the “Neubrunn” waterworks and the construction of the secondary school and the commercial and commercial school in the Lößnitz villages .

The municipality of Oberlößnitz honored Hörning in June 1929 on the occasion of his 25th anniversary in office with the dedication of a square in his name.