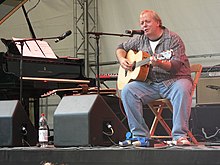 Keneally was born on Long Island and moved to San Diego, California at a young age. There he has been connected to the local music scene since he founded the band "Drop Control" in 1985. Mike Keneally is best known for his participation in Frank Zappa's 1988 touring band. Keneally was included because he had a wide repertoire of zappa pieces that he could play on both guitar and keyboard . The interaction with this band was short-lived, as the concert tour in 1988 was prematurely canceled. After Zappa's death in 1993, Keneally worked with Zappa's eldest son Dweezil and recorded several albums with his group Z. Keneally has released more than ten albums of his own and has played in various bands and projects since 1992.

In 1995 Keneally played in the project "The Mistakes" with Henry Kaiser (guitar), Andy West ( bass ) and Prairie Prince ( drums ). From 1996 to 2001 he led the group “Mike Keneally & Beer For Dolphins” with up to eight people. At the beginning of 2002 he formed his group into a quartet and named them the "Mike Keneally Band". Both ensembles suffered from frequent staff changes, especially the drummers ( Jason Harrison Smith , Nick D'Virgilio , Toss Panos , Joe Travers ) changed very often. Constants in Keneally's band are bassist Bryan Beller (since 1994) and guitarist Rick Musallam (since 1999). Mike Keneally toured Europe from 2002 to 2005 under the name "Mike Keneally and Friends" with Jaan Wessman (bass) and Schroeder (drums).

His participation in Steve Vais tours should be emphasized . Keneally played guitar and keyboard in the Miles Davis tribute project YO MILES! by Wadada Leo Smith and Henry Kaiser . The musician also performed at the Zappanale in Bad Doberan.

Mike Keneally can be heard on over 40 albums according to his self-published discography.