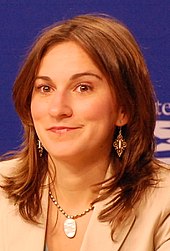 Mindy Finn (* 1981 in Houston , Texas ) is an American businesswoman and politician .

Finn studied political management at Boston University and George Washington University . She later worked as a journalist, in September 2001 she went to Washington, DC as the capital correspondent for the Republican-American newspaper. She later worked for Senator Mike Enzi and the House of Representative Lamar S. Smith , where she was responsible for digital media , among other things . In January 2004, she worked as a deputy for the web campaign for President George W. Bush for the 2004 presidential election responsible. Subsequently, she was responsible for the web presence of the Republican National Committee as well as for the e-strategy of the Republican candidate Mitt Romney in the primaries for the presidential election in the United States in 2008 . She supported Tim Pawlenty in the 2012 presidential election .

Finn was the founding director of online media strategy consultancy Engage . In 2011 she switched to Twitter , where she worked until 2013 as “ Head of strategic partnerships ” in Washington DC. In 2014 she returned to the Republican National Committee and the National Republican Senatorial Committee as an advisor. In February 2016 she moved to the consulting firm IMGE .

In early October 2016, Republican Evan McMullin , an independent candidate , announced that 35-year-old Finn would support him as a vice- president in the 2016 US presidential election. Her candidacy was also seen as a response to the recently increased allegations of sexism against the official candidate of the Republican Party because of statements by Donald Trump in a video , especially since McMullin is regarded as the "Never Trump" candidate of the Conservatives.