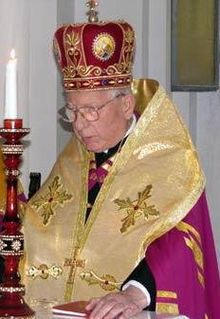 Miroslav Marusyn studied during the Second World War in the seminary in Paderborn and received on 2 May 1948, the priestly ordination . From 1949 to 1951 he completed a doctorate at the Pontifical Oriental Institute in Rome .

Paul VI appointed him in 1977, succeeding Ignatius Clemens Mansourat of the Syrian Church, as Vice-President of the Commission for the Codification of Eastern Church Law (Pontificia Commissio Codici Iuris Canonici Orientalis Recognoscendo) ; In 1987 he was followed by Émile Eid from the Maronite Church.

In 1982 he was appointed by Pope John Paul II with the appointment as titular archbishop secretary of the Congregation for the Eastern Churches ; he succeeded Archbishop Mario Brini . Miroslav Marusyn was the first member of the Ukrainian Church to hold such a high office in the Curia. In 1999 he was a participant in the annual meeting of the Pontifical Foundation Centesimus Annus Pro Pontifice . In 2001, his age-related resignation was granted.

He wrote many liturgical and theological essays with scientific, historical, liturgical and biblical content. In 1984 Miroslav Marusyn was awarded an honorary doctorate from the University of Vienna .