The Moabiter Markthalle , opened as Markthalle X in 1891, was built according to the plans of the architect Hermann Blankenstein within just one year. The main entrance to the market hall is on Arminiusstraße in the Berlin district of Moabit . The building is surrounded by Bremer Strasse (west), Bugenhagenstrasse (north) and Jonasstrasse (east).

To better identify the location, the hall was also given the name Arminiushalle or Markthalle Arminiusstraße . The name of the street and the hall is derived from the Cheruscan prince Arminius , who successfully fought the Varus Battle . From November 2010 the building was called the Zunft [hall] Arminiusmarkthalle , but has now adopted the old and never completely superseded more common name Arminiusmarkthalle . Corresponding entrance signs were changed from guild hall to market hall again .

The building is the tenth of 14 covered market halls in Berlin , which were supposed to replace the open markets , which were considered unhygienic , according to a resolution passed by the City of Berlin in 1881 . The building was able to be built quickly because prefabricated components and an iron construction that was modern for the time were used. 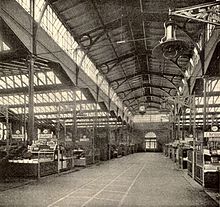 There were 425 stands in ten sales aisles in the hall. A twelve-meter-wide central aisle opens up the 2.48-meter-wide side aisles. This arrangement enabled horse-drawn carts, handcarts or dog teams to bring the goods directly to the stands. The hall, badly damaged in World War II , was rebuilt in the 1950s. The Senate designated the hall as a monument in 1982 and had it extensively renovated in 1991 to mark its 100th anniversary. Five years later, the interior furnishings were restored based on the historical style elements. But hardly a dealer was rented here afterwards, and the listed pedestals of the former small market stalls were not allowed to be changed. Therefore provisional arrangements were made. One of the few old tenants is the florist Karl-Heinz Fechner, who has been selling his flowers here since the 1980s. In addition, there used to be five fish stands and seven butchers in the hall. The historic market hall was considered dead until 2010, after which investors from the Berlin wholesale market took over the Moabiter Halle and reopened it as a guild hall on November 20, 2010 . Now it was mainly restaurateurs who moved in, which resulted in a revitalization of the building after the official end of shopping.

The hall is now called Arminiusmarkthalle again . Since then there have been almost exclusively independent dealers in the market hall next to a Norma branch. In addition to the supply of food and flowers, there are catering, music and event offers . Until the end of 2013 there was the brewery of the BrewBaker brewery directly in the market hall , but the bar is still there. The art installation Gebetomat by Oliver Sturm in the main aisle is remarkable . The machine, modeled on a photo booth, can reproduce over 330  prayers in more than 65 languages.

In 2017 a new, very large shopping center will be built not far from the Arminiushalle. Because of the changed attitude of Berliners to their market halls, the management does not fear the new offer as competition. On the other hand, it says: "That brings more people to Moabit and certainly more people to us."