Montmouth Castle ( Welsh Castell Trefynwy ) is a ruined castle in Monmouthshire , Wales . The ruin, classified as a Grade I cultural monument and protected as a Scheduled Monument , is located on the western edge of the old town of Monmouth on a hill above the River Monnow .

The castle is one of the oldest Norman castles in Wales and was built by William FitzOsbern before 1071 to protect fords through the River Monnow and River Wye . After William's son Roger de Breteuil lost his possessions in 1075, Monmouth fell to William FitzBaderon. Under FitzBaderon's descendants, who called themselves de Monmouth , the castle was the center of Anglo-Norman rule until 1256 . In 1233 the castle was briefly conquered during the rebellion by Richard Marshal , who fought a bloody battle with a royal army under Count Baldwin of Guines in front of the castle on November 25, 1233 . Ultimately, the rebellion failed and Marshal fled to Ireland, where he died in 1234. During the Second Barons' War , the castle was conquered by Simon de Montfort in 1264 . In 1267 it fell like the Three Castles Skenfrith , Grosmont and White Castle to Edmund Crouchback , a son of King Henry III. Edmund had the castle expanded and built the great hall. The castle remained in the possession of his descendants, the Earls and later Dukes of Lancaster.

The ruins of the Great Tower (right) and the hall

Gilbert de Clare, 6th Earl of Hertford, died in the castle on December 7, 1295 . On September 16, 1387, the future King Henry V was born in the castle, probably in the Great Tower. With the accession to the throne of Heinrich Bolingbroke, 2nd Duke of Lancaster as Henry IV , the castle fell to the crown in 1399. King Henry VI. had a new gatehouse built in the 15th century, but after the end of the Wars of the Roses the castle began to fall into disrepair, of which only the great hall was used as a courthouse.

During the civil war in the 17th century, the castle was fought over and changed hands three times before it was finally captured by parliamentary troops in October 1645. In 1647 they had the fortifications, including the curtain wall , the gatehouse and the round keep demolished, so that there are no remains of them today. In 1673 Henry Somerset, 3rd Marquess of Worcester, as Lord President of the Council of Wales and the Marches, had the Great Castle House built for himself as a city residence at the location of the keep . Material from the gatehouse and keep was used to build the manorial house. After Somerset's death, it was initially used as a courthouse in the 18th century. However, after the court moved to the city's Shire Hall , the Great Castle House served as a residence for law enforcement officers, and later as a girls' school. Since 1853 it has been used as the headquarters of the Royal Monmouthshire Royal Engineers regiment . The side wings were added as barracks in 1863, and the former courtyard served as a parade ground. 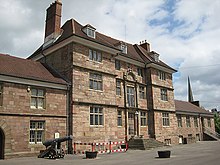 The once round castle complex was surrounded by the River Monnow in the north and west and secured by a wall and moat in the east and south. Of the once important complex, only the ruins of a tower and the hall in the west of the complex and the remains of the ramparts have been preserved. The tower, once called the two-story Great Tower , is similar to the rectangular keep of Chepstow Castle , but was not erected until around 1150. In the middle of the 14th century it was rebuilt under Henry of Grosmont and got larger windows. Its western wall had been undermined during the Civil War and finally collapsed in 1647. The great hall was built shortly after 1267. The large, single-storey building was used as a court hall until it was destroyed during the civil war. Except for the northern wall, the outer walls have been preserved.

The ruins of the Great Tower and the hall are administered by Cadw and can be viewed from the outside, but parts of the other former castle grounds are privately owned and are not accessible. In the former barracks from the 19th century there has been a small museum on the history of the Royal Monmouthshire Royal Engineers and the history of the castle since 1989, the Great Castle House itself still serves as the regimental headquarters and is not open to the public.