Morgenitz has been part of the municipality of Mellenthin in the inland of the island of Usedom since January 1st, 2005 . It is located on the southern edge of a swamp area 1 km away from Lake Krienker , 2 km east of the Peene River and near the southern periphery of the Lieper Winkel .

As grave finds from a megalithic culture show, the area around Morgenitz has been inhabited at least since the Neolithic Age (Neolithic 5500 to 1800 BC).

The later immigrated Slavs from the Liutitzen tribe called the settlement Murignevitz .

Morgenitz was first mentioned in 1270 as "Murigneuitz". The name is traced back to a person's name. At that time, at the instigation of Duke Barnim I of Pomerania- Stettin , the village came into the possession of Grobe Monastery , which was moved to Pudagla in 1309 . A separate chapel was first mentioned for Morgenitz in 1318.

After the Reformation , Morgenitz came into secular nobility. The von Borke family (the spelling of Borcke (n) and von Borck can also be found ) was first mentioned in 1527. She was based at the Krienker Castle, which has been demolished today. In addition to Morgenitz, they also owned Suckow . Colonel Paul Weedeke von Borcke is buried in a crypt under the altar of the church in Morgenitz; his sarcophagus dates from 1699.

Morgenitz also shares the history of the island among the Swedes after the Thirty Years War and the Prussians after 1720.

Morgenitz was a farming and church village in the shape of a street village. It still had a windmill in the 19th century.

On July 1, 1950, the previously independent municipality Dewichow was incorporated.

During the GDR era, a larger LPG complex was built northeast of Morgenitz , which was privatized and modernized after 1990. In the village, as on the entire island, tourist infrastructures were created, such as a riding stable and some holiday accommodations. The proximity of the Lieper Winkel and von Mellenthin have a positive effect here.

Morgenitz, with 150 inhabitants, is located at the intersection of two streets. One runs, coming from the south on the federal highway 110 , via Suckow and ends approx. 6 km northwards in Dewichow on the Krienker See; the other, about 4 km long, comes from the west of Krienke and meets the main road to the Baltic Sea / Heringsdorf in the center of Mellenthin .

In GDR times, many buildings had fallen, but after 1990 the local picture was cobbled -Roads and Reet -gedeckten houses significantly improved. There are two guest houses with a dining room and a few holiday apartments; however, tourism only plays a subordinate role and the rustic impression predominates.

The Morgenitz village church is a simple, single-nave church. It was built as a late Gothic brick building (around 1500) without a tower. One of the oldest preserved baptismal fonts in Pomerania is located here. 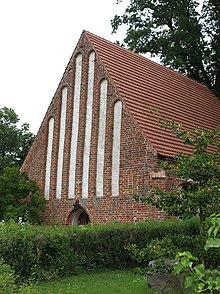 A couple runs a ceramics workshop in a thatched farm near the church. The range includes classic vases and jugs as well as vessels in innovative, winding shapes. On the last weekend of July each year, a pottery market is held, to which ceramic craftsmen and lovers from all over Germany come.

Hiking and cycling trails in the area