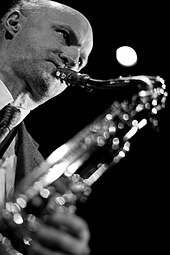 Lockett, who grew up on the Isle of Wight , began playing the clarinet when he was 14. Two years later he performed with the Goose Island Syncopators and the Unity Stompers . While studying at Dartington College of Arts , he turned to the tenor saxophone and took lessons from Bobby Wellins . He initially stayed in Devon before coming to London in 1984 to study in depth at the Guildhall School of Music and Drama . There he worked with Sarah Jane Morris and became a member of Jim Mullen's band (1988-93). He also worked for Sax Appeal to be part of Ronnie Scott's sextet from 1990 to 1994 . He continued to work with Arturo Sandoval , Ian Shaw , Claire Martin and Andrea Vicari . For many years he belonged to the groups of Martin Drew (1995–2010) and Stan Tracey (1996–2010), but was also on the road with Don Weller , John Critchinson , Trudy Kerr and Jimmy Smith .

In 1996 he recorded his debut album Late Night Sax as After Dark , which reached number 18 in the British album charts .

Together with Martin Drew, he led the project Celebrating the Jazz Couriers between 2002 and 2004 , which was dedicated to the music of Ronnie Scott and Tubby Hayes and which received a British Jazz Award for best combo in 2002 ; the band, for which he also arranged, was continued in 2004 as The New Jazz Couriers .

In 2008 Lockett presented the album The 3 Tenors at the Appleby Jazz Festival together with tenor saxophonists Art Thema and Don Weller .