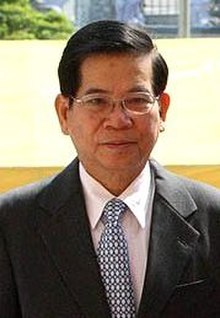 Nguyễn Minh Triết (born October 8, 1942 in what is now Bình Dương Province ) was President of the Socialist Republic of Vietnam from 2006 to 2011 .

Nguyễn Minh Triết was born in a village in what is now the province of Bình Dương near Ho Chi Minh City . There he studied mathematics in the 1960s and was active in the student movement that turned against the US- backed regime. In 1965 he joined the Communist Party of Vietnam under the code name Sau Phong , which at that time had to work underground. After the Vietnam War from 1975 onwards he worked on the governing bodies of the party's youth association. From 1991 he took over the leadership of the party committee in his home province of Bình Dương, to which he had returned in 1988. In the same year he also became a member of the Central Committee . In January 2001, he became secretary of the Ho Chi Minh City Party Committee. During his tenure, he was able to convict the South Vietnamese mafia boss Năm Cam . He excelled in fighting corruption and opened Ho Chi Minh City to foreign investors.

At the 10th Congress of the Communist Party of Vietnam in April 2006, he was proposed as President of the Republic and on June 27, 2006 was confirmed by the National Assembly . On that day he succeeded Trần Đức Lương . On the same day he proposed Nguyễn Tấn Dũng as the new head of government .

Head of State of Vietnam

Note: The surname of this Vietnamese name is Nguyễn , in Western texts the spelling is often simplified Nguyen . According to Vietnamese custom, the person should be referred to by their nickname Triet - even in formal situations .