Their role in the country's political system is defined in Article 4.1 of the Vietnamese Constitution as follows:

"The Communist Party of Vietnam, the vanguard of the Vietnamese working class [...] and the whole nation, which is guided by Marxism-Leninism and Hồ Chí Minh thinking, is the leading force in the state and in society." 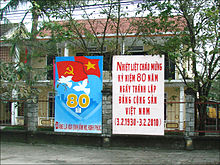 Posters of the Communist Party of Vietnam 2010 in Hué

In 1925, while in exile in Guangzhou , Ho Chi Minh established the Society of Comrades of the Revolutionary Youth . He was supported by both the Comintern and the then national Chinese authorities. On February 18, 1930, Ho Chi Minh founded the Communist Party of Vietnam together with other communists . The organization was founded in Hong Kong in order to avoid access by the French police. The party formulated its core goals as overcoming French colonial rule and overcoming the capitalist system by establishing a socialist state. With regard to social policy, the party promised an eight-hour day , the literalization of the population and equality between men and women. In economic terms, the program envisaged the abolition of the high colonial tax burden on the majority of farmers and the establishment of a socialist economy with nationalized banks and industrial companies. Improvements to this program from 1930 were made a few months later to ensure conformity with the Comintern. As a result, the party was renamed the Indochinese Communist Party . Despite these changes, Ho and his party in the Comintern preferred to neglect the social Marxist revolution over the national question of independence. The practice of including small and medium-sized landowners in the party was also criticized as a lack of loyalty to the line.

In parts of the provinces of Nghệ An and Hà Tĩnh , around 100 spontaneous strikes and protests by farmers against the colonial power took place in 1930 due to the high tax burden and the threat of food shortages. As a result, farmers' councils, the so-called Nghệ-Tĩnh Soviets , were founded in numerous communities , which, under the leadership of the Communist Party, implemented local measures such as land redistribution, reduced working hours and the establishment of literacy programs. By mid-1931, these efforts were so successful in the two provinces of central Vietnam that 31 village soviets were founded. The movement was eventually crushed by French colonial troops. The repression measures resulted in several thousand deaths. Around 9,000 Vietnamese were imprisoned. The French security police Sûreté smashed the party's conspiratorial apparatus in the country. In 1931, Ho was arrested by the British authorities in Hong Kong, but was able to escape. In 1932 all members of the Central Committee and all heads of the regional committees were either imprisoned or killed. However, as the country's bourgeois parties distanced themselves from the uprisings, the Communist Party gained tremendous popularity among the colony's population. After the decline of the Populaire Front and the associated shift to the right in French politics, there was another wave of arrests in which around 2,000 people were interned.

In 1931 she was on the XI. Conference of the EKKI incorporated into the Comintern as an independent section . In consultation with the Comintern, the party was led from abroad after the suppression of the Soviet movement in the country. From 1934 the party was led by an instruction committee from southern China. The First Congress of the Indochinese Communist Party took place in Macau in 1935 . Under the chairmanship of Ha Huy Tap, the party reaffirmed its doctrine of the continuation of the class struggle. On instructions from Moscow, the KPI changed its strategy during the Popular Front and acted with a legal front organization with the aim of forming alliances with other political groups.

In 1941 the Viet Minh was founded on the initiative of the Indochinese Communist Party .

1945 in the course of the August Revolution in which the Viet Minh briefly took control of Vietnam from the Japanese occupation forces and Ho proclaimed a sovereign government in Hanoi, the party dissolved itself in November. The party continued to operate unchanged at least at the district level. This tactical step was an attempt to allay the non-communist forces from fear of the party's claim to political omnipotence. For Josef Stalin , the self-dissolution raised doubts about the ideological loyalty of the leadership of the party around Ho and worsened the climate between the Vietnamese communists and the Soviet Union.

At the Second Party Congress in 1951, at which the Indochinese CP was renamed the Party of the Working People of Vietnam (PdWV) ( Vietnamese Lao Dong ), the party set itself the following main tasks:

In the Democratic Republic of Vietnam ( North Vietnam ), the PdWV was the leader.

In September 1960 the III. PdWV party convention convened. He generalized the experience gained so far and laid down the general line for the transition period to socialism :

At the 4th party congress in 1976, at which the PdWV received its current name, it was about

The head of the delegation of the CP of Vietnam made the Chinese aggression against the SRV and its effects on all areas of social life and politics of the Beijing leadership the starting point of his statements.

Southeast Asia remains a major direction of Beijing's expansion policy. A renewed aggression against the SRV as well as military actions against Laos cannot be ruled out. He said that the reactionary policies of those in power in China had destabilized the country's political life.

On the VI. At the CPV party congress in 1986, the course of renewal ( Vietnamese Đổi mới ) was initiated, which above all brought about an opening of the economy to foreign countries.

From 18th to 25th April 2006 took place the Xth Party Congress of the KPV. He "has emphatically affirmed the socialist orientation of the country's development". In the political report of the Central Committee to the party congress it was stated, among other things: “The results prove the correctness of the… Course of Renewal (Doi Moi)…” In addition, a revised version of the party statute was adopted at the party congress.

Goals of the KPV

"The revised statute of the party formulates the goal of 'building an independent, democratic and strong Vietnam with a just and civilized society free from exploitation, which successfully realizes socialism and communism as the ultimate goal.'"

General Secretaries of the KPV

Leading bodies of the KPV

Politburo of the CPV

Fourteen people belong to the Politburo .

Secretariat of the Central Committee

In the minutes of the IV.−XI. At the SED congress there are greetings from the Vietnamese party to the congresses. Further documents are listed here.

Lists of political parties of the states of Asia