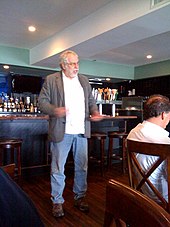 Nolan Key Bushnell (born February 5, 1943 in Clearfield , Utah ) is an American engineer and entrepreneur who founded both Atari, Inc. and the Chuck E. Cheese's Pizza-Time Theaters chain . Bushnell was inducted into the Video Game Hall of Fame and Consumer Electronics Association Hall of Fame, received a BAFTA Fellowship and Nations Restaurant News ' Inventor of the Year award, and is featured in Newsweek ’s "50 People Who Changed America" . Bushnell has founded over 20 companies and is one of the founding fathers of the video game industry. He is currently on the board of directors of Anti-Aging Games, but his latest venture is educational software maker Brainrush, which uses video game technology for educational purposes, incorporating brain research in a way that Bushnell believes will fundamentally transform education. Bushnell, who is the co-founder and chairman of Brainrush, believes Brainrush will be his greatest achievement.

Bushnell comes from a Mormon family in Utah, but says he is not religious himself. He had worked a lot at Lagoon Amusement Park in his hometown of Ogden during his school and college days . There he was particularly interested in the Midway Arcade Games, where the theme park visitors had to use their luck and skill to reach their goal and win a prize. In 1968 he studied electrical engineering at the Universities of Utah and Stanford and was a member of the Pi Kappa Alpha Brotherhood . It was there that he came into contact with computers for the first time . While he was studying computer science , he was particularly fond of playing Spacewar , originally written by Steve Russell for the DEC PDP-1 , and wanted to release it as a machine version. He produced a few copies of the first arcade machine called Computer Space , but ultimately the game was not accepted due to its complexity - the potential customers were not yet experienced enough with video games.

After selling Atari to Time Warner for $ 28 million, he bought the mansion of coffee magnate James Folger in Woodside , California, and lived there with his wife, Nancy, and their eight children. The Bushnells now live in Southern California. Bushnell's oldest child, Alissa, works with him at uWink .

Nolan grew up in the Church of Jesus Christ of Latter-day Saints but is no longer an active member. A 1999 Time Magazine article describes him as an "expired Mormon" and describes how he smokes a pipe in a way that is inconsistent with Church health regulations.

In June 2008 a new film was announced that would star Leonardo DiCaprio Bushnell.

Bushnell was featured in the documentary Something Ventured , which premiered in 2011. In his private life he is committed to international student exchanges .

In 1969, Nolan Bushnell and his partner used a brief break Ted Dabney to Syzygy, with the intention of a Spacewar to produce clones of Computer Space was to be called. To keep their business alive while they developed the prototype, they offered a repair service for broken pinball machines. They reached an agreement with Nutting Associates , a maker of coin-based guessing and shooting games, who produced a fiberglass case that contained the coin transport mechanism.

Computer Space became a commercial failure even though sales topped $ 3 million. Believing that Nutting Associates hadn't marketed the game really well, Bushnell decided to license his next game to a major manufacturer.

On June 27, 1972, he founded the computer company Atari with his partner Dabney and starting capital of $ 500. Originally he wanted to name the company Syzygy , but to his own surprise there was already a roofer with this name and he switched to the name “Atari” - a term from Japanese martial arts and the board game Go , which he likes in his spare time played. Atari means: attack, hit. He had his colleague, Atari co-founder Allan Alcorn, program a simple reaction game: Pong . This game, which is easy to understand even for beginners, established the company's first success in 1972. Bushnell got into a legal dispute with the Magnavox company , which ended with Magnavox receiving a profit share from Atari until 1976. Atari manufactured the video console 2600 in 1977 and offered games on plug-in modules that could easily be plugged into the device to play. This developed into a hit with around 30 million devices sold and over 500 games. In 1979 the Atari home computers followed , with which one could not only play but also program.

In 1976 Bushnell sold Atari to Time Warner , but remained a consultant for another two years. During this time he disliked the Warner management more and more, for example the conservative way of bringing out new products, the dining room for the manager or the 4-star chef. In 1978 Bushnell finally left the company.

In May 1977, he founded the Chuck E. Cheese's Pizza Time Theater fast food chain , targeting families with children. The concept included offering customers not only food but also slot machine games in an atmosphere decorated with animatronic figures. This restaurant chain was probably the first to take this approach. From 1979 Bushnell successfully granted licenses to franchise companies, from which the Showbiz Pizza Place company was born. In 1984, during a game industry crisis, Chuck E. Cheese lost $ 15 million and went into Chapter 11 bankruptcy proceedings with a total of 250 locations (128 corporate, the rest franchise) . The restaurants operated by Chuck E. Cheese himself were incorporated by Bushnell's franchisee Bob Brock into his company Showbiz Pizza Place. Both chains ran side by side until 1993, when Showbiz Pizza took over Chuck E. Cheese as mascot and namesake.

In the 80s, Nolan Bushnell founded the games company Axlon , which also produced games for the Atari 2600 . He was also a co-founder of Sente Games . He also took the name "Sente" from Japanese. While in the game of Go the word "Atari" is the threat to hit a stone, Sente means to be in the forehand.

With Allan Alcorn, Bushnell founded Androbot Inc. in 1982 to manufacture affordable home robots that were suitable for playing and transporting small items. The deal attracted so much attention that Bushnell received calls from people wanting to buy his company's stock. He wanted Androbot to go public, so he borrowed capital from Merrill Lynch Private Capital Inc. When the technology stock market collapsed in 1983, Merril Lynch withdrew its support, so that Bushnell was suddenly alone with $ 5 million in the chalk. Shortly thereafter, Merrill Lynch sued Bushnell for a $ 500,000 promissory note, and Bushnell counterclaimed because, in his opinion, Merrill Lynch was complicit in the Androbot bankruptcy. This litigation dragged on for years and cost him almost all of his fortune. To finally end it, he sold his mansion in 1998 and used it to pay off his remaining debts.

Since 1999 he has been running the internet company uWink . This tried to establish itself on the market with various products, including a touch-sensitive kiosk model, a profit concept for cash and prize prizes and as an online entertainment system network. The production of the kiosk model has since been discontinued. The last attempt was the uWink Bistro, an interactive restaurant where diners could order their food via touch-sensitive screens and pass the time until delivery with games or watching short films. It should even be possible to interact with other guests at other tables via the screens. Three restaurants opened in California, the first in Woodland Hills on October 26, 2006, the second in Hollywood, and the third in Mountain View . However, the 2008 economic crisis affected the restaurants and had to close again.

In April 2010 Atari invited Bushnell to join the company as a member of the Supervisory Board and as a consultant. Bushnell accepted: "I am very happy to get back together with Atari - at a time when we can grow rapidly into growing key areas of the gaming industry." In July 2013, Atari had to file for bankruptcy. Bushnell said in an interview that a number of shareholders had abused Atari, they were only interested in the high salaries instead of saving the company.

Bushnell's youngest company is Brainrush, which he is the founder, boss and chairman of, a company that uses video game technology to make educational software. The company was financed by a venture capital fund in 2012. It is based on the idea that the curriculum can be supported by mini-games. You can take any unit from language, art, geography, multiplication tables, chemistry or biology and turn it into an educational game. Brainrush calls the underlying technology "Adaptive Practice". Learning, practice and trying things out should all take place at the same time and find themselves in one thing: the game. Assessments should take place automatically and be able to be repeated at intervals. Between 2010 and 2012, Brainrush tested the concept in Spanish with 2,200 teachers and 80,000 students and, according to its own information, achieved a learning speed that is up to ten times faster. In autumn 2013, Brainrush wants to bring out the full platform for every topic.

In 2017 it became known that Bushnell was working on a "revolutionary" VR technology with his company Modal VR. The start-up is developing a portable large-area VR system for companies that can be used not only for entertainment purposes, but also, for example, for training security forces.

Colloquial use of Atari

In Tobias O. Meißner's book on the development of the computer game industry and the associated scene, the generation of American Atari kids is set in parallel with the associated generation of golf in Germany. As Atari Democrats moderate left in the US technology-friendly politicians are called out of time, so among other things Al Gore .

In July 2010, Bushnell received the Lara Award in the Lara of Honor category , an award from the German video game industry.