The onomasiology (from ancient Greek ὀνομάζειν onomazein , rename 'to ὄνομα onoma , Name') or name doctrine is a branch of semantics examined and with which linguistic expressions a certain thing is called.

It starts with an object and asks about the name - in contrast to semasiology , which asks about the meaning based on a name , e.g. B. which different objects are named. By setting up word fields , terms are systematized and gradual changes in meaning are shown.

Not in all, but in many cases, onomasiology is understood historically, that is, as a doctrine of change in designation (historical onomasiology) .

Onomasiology in the sense of the designation change theory

When naming a thing, every speaker has the option of using an existing name or - sometimes unconsciously - of creating a new name. The creation of a new name can be traced back to different reasons, motives and triggers: these can be purely linguistic-communicative, but also psychological, social and changes in the world. If you want to create a new name, you basically have three options:

Although onomasiological work goes back to Jakob Grimm , the beginning of the actual onomasiology is only connected with the Romance studies of Friedrich Diez (1875), Ernst Tappolet (1895), Adolf Zauner (1902), who gave the discipline its name, and Clemente Merlo (1904) and the work of the Indo-Europeanist Berthold Delbrück (1889). As a result, numerous onomasiological works, often dissertations, have been published, especially in Romance and German studies , but also in Indo-European studies . The former Heidelberg professor Johannes Hoops can be regarded as the founder of an English onomasiology.

In the first half of the 20th century, three main trends can be traced. We can speak of an early onomasiology in which the etymologies of names for precisely definable Concrete were examined.

In a second phase, the method “words and things” or “things and words” is developed, which is associated with the two conflicting namesake from Graz, Rudolf Meringer and Hugo Schuchardt . Meringer also founded a magazine of the same name in 1909, which, however, was too much in line with the regime during the time of National Socialism under the editor Walther Wüst and was therefore no longer printed after the Second World War .

The third phase is word field research, which is associated with the name Jost Trier (around 1930), although approaches to field research can already be found in Michel Bréal (1883) and Ferdinand de Saussure (1916). At the same time, linguistic geography has also been refined since Jules Gilliéron's work : while the Atlas linguistique de la France (ALF) (1901–1910) only contains neutral terms for the most important concepts, the Linguistic and Subject Atlas of Italy and Southern Switzerland (AIS) (1928–1940, by Karl Jaberg and Jakob Jud ) have occasionally given comments on the special (situational) use of an expression. Two temporarily last onomasiological highlights appear in 1949 with the Indo-European historical dictionary by Carl Darling Buck (1866–1955), on which Buck worked intensively over 20 years of his life, aware of all the problems, and which considered around 1,500 concepts, and which for years rather little noted cross-language family study by Carlo Tagliavini on the designations for the pupil.

It is true that a large number of onomasiological treatises also emerged in the second half of the 20th century, as the "Bibliography of Onomasiological Works" of the journal Onomasiology Online shows (without it being possible to assume that all onomasiological works are completely covered, as there are many articles have been published in less popular journals). Theoretical treatises on historical onomasiology did not materialize after the Second World War, at least in Europe; only in American anthropology have noteworthy (mostly cross-lingual) works been produced, particularly connected with the names Cecil H. Brown , partly in cooperation with Stanley Witkowski and Brent Berlin . It was not until 1990 that a theoretical study of onomasiology in linguistics in the narrower sense began to emerge. From a lexicographical point of view, Henri Vernay's Dictionnaire onomasiologique des langues romanes (DOLR) should be mentioned, as well as DÉCOLAR ( D ictionnaire é tymologique et co gnitif des la ngues r omanes) developed at the University of Tübingen under the direction of Peter Koch .

A "cognitive onomasiology" is primarily propagated by Andreas Blank and Peter Koch . This means that in addition to the level of the concept or designate, the linguistic level of the (structured) meaning must also be taken into account and an anthropocentric perception of the world is assumed. More recent reflections on theoretical onomasiology originate from the pen of the aforementioned Pavol Štekauer himself and from Dirk Geeraerts, Peter Koch and Joachim Grzega .

Reasons, motives and triggers for the change in name

If a speaker has to name a certain concrete thing in a certain concrete situation, he first tries to assign it to a designate (= a category ). If he can assign the speaker to a designate or signified , signifié , he can - taking into account a communication-related, language-economical cost-benefit calculation - fall back on an existing word or decide more or less consciously to create a new name.

The formation of a new name can be due to different factors that also act simultaneously. The complete catalog includes the following factors:

Looking more closely at the change in terms, the name changes as follows: In the case of the intended, conscious innovation in terms, the speaker may have to go through several levels of the word-finding process. These are (1) the analysis of the specific features of the concept, (2) the selection of the naming motif, (3) the selection of the forms to express the naming motif. 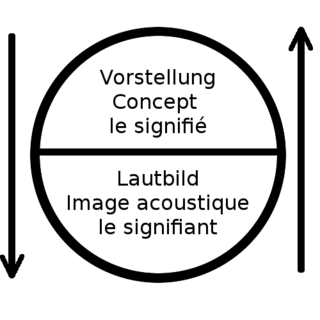 Relation and mutual reference of signified ( le signifié ) and signifier ( le signifiant ) in the use of a sign according to Saussure .
The arrow on the left symbolizes the use in which a sequence of sounds is indicative of a mental idea, whereby an expression as the signifier can become the designation of a concept (onomasiology). The arrow on the right, on the other hand, shows the direction of a use with which a mental representation is understood as being designated by a sound sequence, whereby a conceptual content can become the signified of the meaning of an expression (see semasiology ).

Is not an already existing word cut, but an entirely new formed, so the speakers are various forms of composition (including blending and idioms), return derivative acquisition of a word already existing, syntactic Recategorisation, various forms of alternation , pun and root creation available (whereby he can follow a model of his own idiom or that of another idiom or no model - the latter, however, only in the case of the new root creations). We thus receive the following complete catalog of formal designation procedures (not all procedures occur in German):

The procedure ends with level (4), the actual debate.

However, in order to create a designation that is not simply based on the abbreviation of an existing word, one or two physically and / or psychologically salient designation motifs ( iconemes ) must first be selected. The choice is guided by one or more potential cognitive-associative relationships between the concept to be designated and the selected designation motif or motifs. Important phenomena are: