The process was introduced in 1981 by Dieter W. Pohl from the IBM laboratory in Rüschlikon. In the USA, it was developed by, among others, the 2014 Nobel Prize in Chemistry, Eric Betzig , Aaron Lewis , A. Harootunian and Michael Isaacson at Cornell University . Both groups published publications in 1984. Betzig and colleagues demonstrated it in 1986.

Edward Hutchinson Synge had the basic idea for this in 1928, who also discussed this with Albert Einstein , and in 1956 John O'Keefe. At that time, however, the technical prerequisites for implementation, which later opened up with the development of scanning tunneling microscopy , did not yet exist . For microwaves (wavelength 3 cm) EA Ash and G. Nicholls demonstrated resolution below the Abbe limit in 1972 by examining the near field. 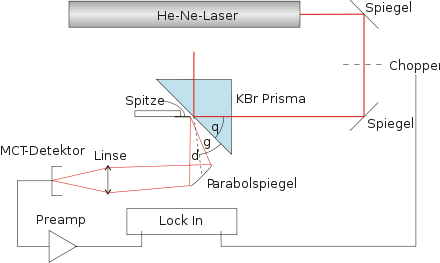 Scanning near field microscope; Basic structure with an apertureless tip and its excitation by the evanescent field of a totally reflected laser beam

The tip is brought into the near field of the sample and kept at a constant distance by means of a control circuit . There are several methods for this distance control:

The usual distances between the tip and the sample are 1–10 nm. The tracking of the tip provides a topographical image of the surface, but optical information about the surface structure can also be obtained with the scanning near-field microscope. The optical resolution depends on the fineness of the tip and exceeds that of imaging light microscopes many times over.

Two types of tips are used:

Light-guiding tips with an aperture can be used as a light source or as a light collector. In the first case and with apertureless tips, only that part of the sample is excited to emit light , which is just below the tip. The sample is moved in a grid pattern above or below the tip, and the distance signal and the optical signal are recorded at each position.

The advantage of an optical scanning near-field microscope over the non-optical scanning probe method is that contrast mechanisms known from conventional optical microscopy can be used, the sample is examined non-destructively and chemical information about the sample can be obtained, e.g. B. Raman effect signals in tip-enhanced Raman spectroscopy ( TERS ).

Disadvantages of the SNOM are

Aperture tips are usually made of glass or silicon fibers that are pointed at the front by drawing or etching. In the conical area, glass fibers are coated with aluminum or silver , as otherwise light would escape here. A small opening at the tip is not vaporized (either vapor is vaporized from behind, later a part is cut off at the front, or a hole is drilled with an ion beam). The apertures usually have a diameter of around 100 nm. 20 nm have also been reached. The use of a near-field microscope in conjunction with aperture tips is referred to as a-SNOM (aperture-type SNOM).

The light is coupled into the fiber and so only the part under the sample that is currently in the near field under the aperture is illuminated ( illumination mode ). Since the aperture is much smaller than the wavelength, the intensity is very low. The light from the sample is collected by conventional optics (see confocal microscope ) and usually evaluated with a photomultiplier .

The reverse procedure is also used: a larger part of the sample is illuminated and the aperture and the fiber collect the light locally ( collection mode ).

Aperture-free tips are usually made entirely of metal (silver or gold ) or of a harder material (glass, silicon, tungsten ) and then coated with silver or gold. When this tip is brought into the focus of a laser beam , plasmons are excited to vibrate in the tip . The field resulting from this oscillation is greatest at the tip (see Babinet's principle ). This field can be used to excite molecules or other structures on the sample and to stimulate them to emit light. The resolution depends on the size of the tip, which can be 20 nm and smaller. This method is generally referred to as s-SNOM (scattering-type SNOM).

The tip can be excited by evanescent waves (see picture above), in which case only transparent samples can be examined. For samples on non-transparent substrates (e.g. silicon or graphite ), the light is focused on the tip by means of an objective lens or by means of a parabolic mirror .

The advantage over the aperture tips are the higher intensities on the sample.