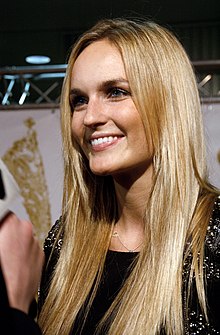 In 2000, the young athlete at the time was elected Miss Austria at the age of 15, making her the youngest Miss Austria so far. In the same year she competed for Austria at Miss World in London. Since then Kaiser has worked as a model and testimonial .

In 2004 she won first place at the Austrian javelin championships . In the heptathlon , Patricia Kaiser was Austrian runner-up, and in 2009 she took second place in the European Athletics Cup for all-around fighters .

In 2005, she and dance partner Alexander Kreissel took part in the first season of Dancing Stars on ORF . She made her debut as an actress with SOKO Donau , followed by Der Glücksbringer ( ZDF ).

In spring 2011 she published the fitness CD Core & More together with sports scientist and physiotherapist Roman Jahoda .

Together with Leo Aberer , she reached first place on the Ö3 listener charts with the song There will never be another you , in addition to participating in the 2011 song contest . In addition, they arrived with three other singles in the charts ( Open Sesame , Escucha Me ind Do not wanna be ).

She has been moderating the DTM in Spielberg since 2017 . She hosts her own programs at LT1 ( OÖ Life ) and Laola1.at ( Fußball total ).

In addition, Patricia has been an ambassador for Wings for Life since 2014 .

Patricia Kaiser is married. Since 2013 she has had the real name Wolf. She is the mother of two children and lives with her family in the south of Vienna.