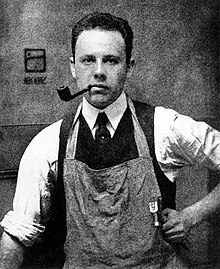 Strand was born and raised in New York to Bohemian immigrants. At the local Ethical Culture School , his teacher Lewis Hine taught him the basics of photographic work as a prerequisite for professional photography. It was through him that Strand got to know Alfred Stieglitz and the Photo-Secessionists and began to deal intensively with his contemporary art. In 1909 he completed his training at the ECS and became a member of the New York Camera Club . He worked in his parents' hardware store until 1911 and then worked as a commercial photographer until 1918. He experimented with soft focus lenses ,Rubber prints and enlarged negatives. With his photographic work from this period he showed the negative aspects of modern industrial civilization, life in New York with its human misery and alienation.

In 1916, Alfred Stieglitz dedicated the last two issues of Camera Work to him, accompanied by an exhibition in his gallery 291 . At the same time, Paul Strand dealt with the role of photography in art. In a text in Seven Arts , he emphasized the need for a media-friendly use of photography, the objectivity of which does not contradict art.

From 1918 to 1919, Strand was an X-ray technician in the Army Medical Corps . After his discharge from the army, he photographed landscapes and rock formations and also tried to earn money in the advertising industry. With the painter and photographer Charles Sheeler , Strand made the experimental film Manhatta in 1920 , an avant-garde film in the genre of city ​​films .

Strand could not make a living with art films and photography, so he began his freelance work as a cameraman in the news and sports sector by buying his own film camera in 1922. Photography took a back seat on the weekends and holidays. This phase of his life - stepping out of the hectic urban life of New York in his spare time - was reflected in his later works, in the landscape and nature photographs . It became a life-long encounter between the city dweller and nature.

Until the end of the 1920s, Paul Strand mainly took detailed shots of motifs in nature. "The image idea [here] clearly takes precedence over the image quality of the photography." He created a first turning point in the examination of landscape photography while working on the Gaspé peninsula in Canada . Here he came to a way of working that not only comprehends the photographic process visually, but also thematically.

Between 1925 and 1930, Strand made several trips to unknown parts of the United States and Canada. During this time he discovered rural life in America and the fascination of representation. He lived in Mexico from 1932 to 1934 . Here he expanded his expression of culture and people, he was appointed head of photography and cinematography in the fine arts department in the Ministry of Education. In 1936 he married Virginia Stevens. From 1937 to 1944 he was president of Frontier-Films , a non-profit organization for the production of educational films (which had emerged in 1936 from the Film and Photo League , which Strand had been a part of since 1935). As a cameraman and director, he produced many documentaries. After almost ten years of film activity, Strand returned to photography in 1944. In the following years he went on many photo trips and exhibitions. His project Time in New England was supposed to be the attempt to discover traces of surviving traditions in the manifestations of a region, its landscape and the people. This resulted in a book that describes America as a traditional country with its various historical traces.

1947 entered beach officially (1936 split-off from the Film and Photo League) Photo League , where he had worked in verschiedenster form since 1936 and exerted a great influence. In 1947, under Senator Joseph McCarthy , the Photo League was placed on a list of un-American or state-endangering organizations, against which the open commitment to membership should be a defense. In 1951 the League was finally dissolved.

In 1951 Paul Strand settled in France because America no longer offered him any prospects for life or work in the wake of the communist persecution of the McCarthy era . In Europe he hoped for a place where he could concentrate on a manageable living space. In the same year he married Hazel Kingsbury. In 1955 he bought a house in Orgeval , near Paris, where he lived until his death. The next twenty years were marked by travels, exhibitions and publications. Paul Strand died in 1976 at the age of eighty-six at his home in Orgeval.

“Strand's meticulous concentration on the special materiality and shape of his motifs and their consequent isolation from the process of contemporary history are the prerequisites for a construction of the timeless. In this sense, every photo is a formally conscious, autonomously thought individual statement [...] Not 'life photography', not acceleration, but rather slowing down the recording process was the starting point for a photographic image that, as a subjectively formulated fragment, is always just one element in the designed structure of his cultural portraits. "

His works are not only documentary, but uncompromising in their search for truth. Stieglitz wrote in 1916:

“Strand added something new to the old. His recordings are brutal, direct, free of any humbug, free of gimmicks and unaffected by any ism. "