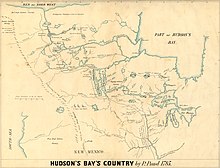 Ponds map of the Hudson Bay region from 1785

Ponds map of the Athabasca region from 1785

Pond joined the colonial army at the age of 16 and participated in the British conquest of Montréal, France . In 1775/76 he worked in the area of ​​the Sturgeon and Saskatchewan Rivers , before taking part in the expeditions of the explorers and fur traders Alexander Henry and Benjamin Frobisher to the Churchill River in the two following years , during which they took them to the Clearwater River and the Advancing at Lake Athabasca .

From 1780 Pond explored and mapped the northwest of Canada from Lac la Ronge up to Lac Île-à-la-Crosse , where he wintered in 1782/83. Due to its inadequate equipment, it made some cartographic errors here.

The greatest merit of Pond lies in the exploration of large parts of the lakes and rivers of central Canada. Mention should be made of the lakes Cree Lake , Lac la Ronge, Lac la Plonge , Gold Lake and Candle Lake and the rivers Peace River , Churchill River and Athabasca River . Above all, the much better known explorer Alexander MacKenzie would hardly have been able to carry out his plans without Pond's preliminary geographical work.

Pond remained unrecognized as a researcher during his lifetime. It was only after his death that Peter Pond Lake in northern Saskatchewan was named in his honor.