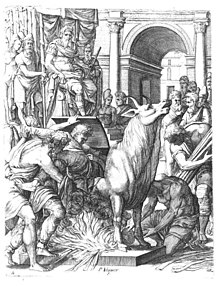 Phalaris ( Greek  Φάλαρις , son of Leodamas of Rhodes ) was around 570 to 555 BC. Chr. Tyrant of the Greek colony Agrigentum (modern Agrigento ) in Sicily .

While Aristotle states that Phalaris obtained tyranny from the office of a general (strategos autokrator) , according to Polyainus , Phalaris was initially commissioned with the construction of the temple of Zeus Polieus. He said he used this company, which secured him money and people as well as a point in the city, to commit a coup d'état with mercenaries and armed prisoners. While there was a festival in the city, Phalaris and his troops attacked the citizens and made themselves a tyrant.

With the help of his mercenaries, Phalaris then ruled the city and led successful campaigns against the Sicans . His rule ended after 16 years due to a conspiracy.

In later tradition, Phalaris appears as a model of a cruel tyrant. Above all, the legend of the bronze (brazen) bull is known, which the artist Perilaos is said to have made for Phalaris to slowly roast strangers and people he hated on a fire, their screams of pain sounding like the roar of a bull. As the first victim, Phalaris is said to have locked the artist himself in the bull's body.

Diodorus says that the bull of Phalaris really existed . He says that Himilkon sent him to Carthage after the conquest of Agrigento , but that Publius Cornelius Scipio Aemilianus Africanus returned him to the Agrigento people 260 years later after the destruction of Carthage. The bull of Phalaris also served Lucianos of Samosata in two satirical dialogues, in which he had deputies of the tyrant appear in Delphi , who offered the god that infernal machine as a gift and presented the cruel tyrant as a just man; he then has the priest's mouth declare the gift of anger as a godly sacrifice.

The death of Phalaris was also legendary. He is said to have lost his life through a parable by Pythagoras . The great philosopher once spoke in Phalaris' and the bourgeois presence of people's fear of tyrants and proved how unfounded it was, by the example of the pigeons, who fearfully flee from the sparrowhawk and would drive him to flight if they did they boldly turned against him. This speech made a citizen so excited that he picked up a stone and threw it at the tyrant; others followed suit, so that Phalaris was stoned to death. According to other versions of the legend, after his fall, the tyrant was killed either alone or with his mother himself in the bull and the torture device was then thrown into the sea. Whether the legends correspond to reality or were invented about him after his death in order to belittle him cannot be reliably determined. All variants have in common that they show a great anger of the population at the ruler, which indicates a cruel rule.