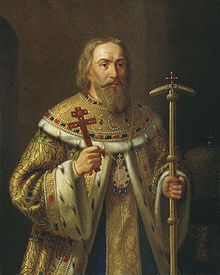 Progenitor of the Romanovs

Philaret was the son of Nikita Romanow († 1586) and Eudokia Gorbaty-Schuiski. He married Ksenija Ioannovna Schestowa, who was later banished to a monastery as a nun Marfa. In 1596 she gave birth to the future Tsar Michael I.

Philaret's father Nikita Romanovich was the brother of Anastasia Romanovna, who married Tsar Ivan IV in 1547 and died in 1560. This made Philaret the cousin of Tsarevichs Dmitri († 1553), Ivan (who was killed by his father in 1581) and also the cousin of Tsar Fyodor I.

As Fyodor Nikitich Romanov, he was the head of the Moscow boyar Romanov Yuriev and progenitor of the Romanov - dynasty . After he was defeated in the power struggle for the tsar's throne in 1598, he was forced by Boris Godunov in 1601 to go to the monastery and take the monastic vows , where he took the name Philaret (also Filaret).

Under the rule of Pseudodmitris I , he returned to Moscow in 1605 and became Metropolitan of Rostov and Yaroslavl in 1606–1610 . In 1606 he took part in the overthrow of the first pseudodimitri. In 1608 he was taken prisoner by Pseudodimitris II. In 1610 he returned to Moscow, where he played a major role in the overthrow of Vasily IV Shuisky . At this time, Philaret campaigned for a foreign prince to be appointed to the throne of the tsar. In this sense, he negotiated with Poland about a candidacy of Sigismund III. In connection with his refusal to accept the conditions of the Polish side, Philaret was arrested and deported to Poland in 1611.

It was not until 1619 that he was allowed to return to Russia from royal custody. In the meantime his son Michael Fyodorowitsch had been elected tsar by Zemsky Sobor in 1613 . After his return in 1619, he named his father Patriarch of Moscow.

Co-regent of Tsar Michael I.

Philaret was the official co-regent of Michael I, who ascended the Russian throne on July 11, 1613 (coronation day). He determined politics , especially the foreign policy of the Tsarist Empire. In the 1620s his thoughts were entirely on revenge against Poland, but also on internal reforms, e.g. B. that of finances, he carried on with great zeal. It was even more important to him to preserve the Romanov dynasty and so he urged his son to marry so that the succession could be ensured. The war against Poland began in April 1632, but it was not to be the success Philaret had envisioned. He died in the middle of the war in 1633. As a result of the defeat, the Tsar had to pay over 20,000 rubles and return all conquered territories.