Police training center for technology and traffic in Lower Saxony

Driveway to the police training center for technology and traffic in Lower Saxony with the main building, 2019

The Police Training Center for Technology and Transport Lower Saxony (PATVN) was a police facility in Lower Saxony , which was subordinate to the Lower Saxony Ministry of the Interior . It existed from 1963 until it was dissolved in 1997 and was based in the Wennigser district of Wennigser Mark near Hanover . The main task of the PATVN was the education and training of the employees of the Lower Saxony police in police technology. The facility also looked after telecommunication and telex technology , central weapons and equipment storage, and service dogs .

The PATVN was created by a circular issued by the Lower Saxony Ministry of the Interior on January 1, 1963 as a facility for the police force in order to summarize the tasks of various predecessor organizations. The driver training for police officers had already taken place in Wennigser Mark since 1956 and the motorized traffic police training had existed there since 1960. Initially, the PATVN served as a training center for police officers of the state of Lower Saxony who required specialist technical or traffic law knowledge. Later, members of the criminal police and non-civil servants received further training.

The headquarters of the training center was in Wennigser Mark. There were branches for service dog training in Ahrbergen near Hildesheim . The telecommunications system was based in Hanover, initially at the Lower Saxony Ministry of the Interior and later on the premises of the Lower Saxony state riot police . The central weapons workshop and the central equipment store were in Hildesheim.

In 1979 PATVN had around 160 employees. At the end of the 1990s, around 60 specialist teachers and employees carried out around 400 advanced training events for up to 5500 participants.

In the course of a reorganization of the Lower Saxony police, the PATVN was dissolved on May 1, 1997 by a circular issued by the Lower Saxony Ministry of the Interior. The Police Office for Technology and Procurement Lower Saxony (PATB NI) (later Central Police Directorate) and the Lower Saxony Police Training Institute (BIP NI) (later Police Academy Lower Saxony ) took over their tasks while maintaining the location in Wennigser Mark .

The PATVN was located on a 53,000 square meter property in Wennigser Mark . On this area at the foot of the Deister , the North German fuse industry built a factory for the production of fuses around 1900 . When the factory stopped production in 1926, the factory buildings were empty. In 1933 she became part of the Secret State Police . From 1940 the buildings were used to house Polish forced laborers . After the Second World War , the Hanover district operated a retirement home in the building from 1946 to 1955. From 1956 it was used by the Lower Saxony state police, among other things for motor vehicle training.

The factory buildings were demolished in the 1970s. In 1974 the foundation stone for a new building complex was laid on the property , the cost of which amounted to 20 million DM and which was completed in 1978. The trees and the differences in level of up to 21 meters in height on the Deisterhang were included in the buildings. The core building of the complex with a total of around 10,000 m² of usable space is a training building on four floors with lecture halls, technical, training and administration rooms as well as cafeteria and kitchen. The accommodation buildings with 30 single and 64 two-bed rooms on three storeys were built into the slope. Up to 150 course participants could be accommodated in it. The underground vehicle hall of the PATVN with workshop and washing hall has the dimensions of 80 × 45 meters. With a ceiling height of 6 meters, water cannons could enter the hall . The complex includes a sports and multi-purpose hall, which has an indoor shooting range in the basement .

End of use and possible new beginning 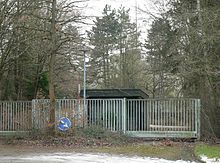 In 2008, the police largely abandoned operations on the site, but continued to use the indoor shooting range afterwards. The sports hall served as a training facility for local clubs at times. The discovery of significant structural defects in 2015 led to a ban on use for the entire property.

The state of Lower Saxony initially offered the site for sale for around 4 million euros, but could not find a suitable buyer. A non-profit housing construction company wanted to demolish the complex because of the considerable need for renovation and build single and multi-family houses on the area. The mayor of Wennigs , Christoph Meineke , suggested using the fiber optic cable on the premises to supply the town with fast internet . In 2015 the property was offered for just under one million euros. In 2016, the media reported that there was a potential buyer for the site whose purchase offer was below the state's asking price.

Since the end of 2016, a police project group has been working on reactivating the overgrown property with its buildings, some of which are demolished and in need of considerable renovation. If you decide to use it again, costs in the millions and a set-up time of around 10 years are expected. Until today (2017) the area is unused and increasingly overgrown. At the end of 2018, the Lower Saxony Ministry of the Interior promised a speedy examination of the future of the site.