The wire-haired vetch or field vetch ( Vicia hirsuta ) is a species of plant that belongs to the genus of the vetch (Vicia) in the subfamily of the butterflies (Faboideae) within the family of the legumes (Fabaceae). 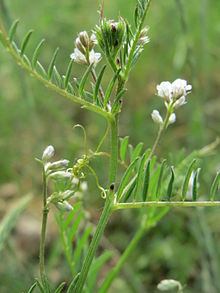 Leaf tendril of the wire-haired vetch 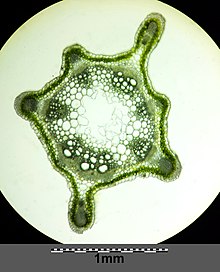 The stem is clearly (four) angular in cross section. 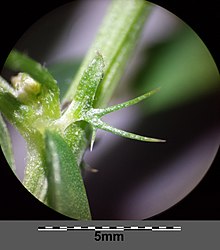 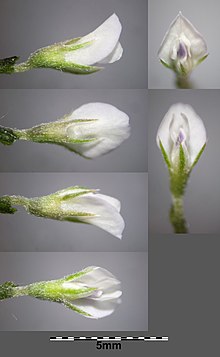 The wire-haired vetch is an herbaceous plant and reaches heights of 15 to 60 centimeters. The feathery leaves have a tendril at its head and four, eight or 16 pairs pinna leaflets that are often front ausgerandet. The stipules are always the same.

Their racemose inflorescences are long stalked and mostly three to eight flowers , but rarely only single or up to ten flowers. The white flowers are usually veined blue and up to 8 mm in size. The legume has two seeds and soft hair.

The species has chromosome number 2n = 14.

The hairy vetch is an annual, widely creeping climber with roots up to 60 cm deep.

It can occur in high density and mass in low-competitive winter organic farming crops . The consequences are yield and quality losses as well as harvest difficulties. Measures to increase the competitiveness of the grain such as the choice of variety or the increase in the nitrogen supply are not sufficient in the case of high weed pressure or the necessary quickly effective nitrogen fertilizers are not available.

Its flowers are very small "butterfly flowers with a folding mechanism". They offer plenty of nectar and are therefore often visited by insects , especially bees . Even self-pollination takes place. Flowering time is from June to July.

The fruits are 2-seeded pods with spherical seeds weighing only 9 mg . The pods are desiccant spreaders with rolled seeds. Random spread via the intestines of ungulates and processing spread by pigeons etc. also takes place, in addition, human spread via earth movements and seed contamination is possible. Fruit ripening is from July to October.

Vegetative propagation is given by runners .

The wire-haired vetch grows on sandy, loamy, often acidic fields, in dry to moderately moist ruderal areas, in dry bushes, on dry grass and meadows. It is also considered to be a calciferous plant. It is widespread throughout Germany, only rarely found in the Alpine region.

In terms of plant sociology, it is a character species of the order Centauretalia cyani in Central Europe, but also occurs in societies of the Sisymbrion association, the order Origanetalia or the class Sedo-Scleranthetea.

The vetch is edible and is or was grown in some places for food use. Their seeds are or have been used as a lens replacement.