The Reichsbahndirektion Schwerin was an administrative district of the Deutsche Reichsbahn .

Building of the Rbd Schwerin

After the November Revolution it was simply called the Railway Directorate of the State Railway, now known as the Mecklenburg State Railway.

Significant routes in this period were:

On January 1, 1938, the lines of the nationalized Lübeck-Büchener Eisenbahn (LBE) were taken over, with the exception of the Hamburg - Bad Oldesloe section.

After the Second World War , on July 2, 1945, the management resumed under the direction of the Soviet military administration .

On October 6, 1945, sections of the route were transferred to the Greifswald district with the Neubrandenburg and Waren (Müritz) depots.

In October 1949 the politically motivated takeover of numerous small and private railways in the area of ​​the management took place.

With Renate Fölsch worked in the period from 1975 to 1982 as vice president from 1982 to 1990 president for the first time in East Germany and after reunification in Germany a woman as president of a railway administration. In October 1989 a "round table" was founded by opposition members in the Rbd-Haus. President Renate Fölsch put the demands of the round table on the house management to remove the leading, dominant political department of the SED. The political department under the leadership of Comrade Kleindienst was deprived of its authority and the party leadership of the SED in the Rbd House was dissolved. Service operations continued in a disciplined and orderly manner despite the political unrest.

On October 15, 1990, the area of ​​the former Greifswald Rbd (former part of Stettin Rbd) was completely assigned to the Schwerin Directorate.

On January 1, 1994, it was dissolved and divided into newly created regional areas as part of the railway reform . At the same time as the privatization of DB and DR, a new state supervisory authority for the federal railways was established. Some competent employees of the former Reichsbahndirektion who had previously been checked by the Gauck authorities were appointed to the Federal Railway Authority , in the Schwerin branch. Among them were two members of the round table.

The political department of the Rbd (which was subordinate to the political headquarters of the DR in Berlin) had no “actual” management tasks, only control functions. She enforced the demands of the SED leadership. In 1953 a fighting group of the working class was founded in the Rbd-Haus by the political department. Later on, the Schwerins railway services also set up a combat group association. The armament included mot rifle equipment. The equipment room was on Dr.-Külz-Strasse, the weapons, armored rifles, grenades, LMG, MPi and pistols were in the armories of the transport police .

The management was divided into service branches:

President with the President's Office

The infrastructure for locomotive service, shunting technology, maritime transport, rescue technology, freight transport systems, passenger transport, weighing technology was provided and maintained by the Ta (technical systems) department, subordinated to the Ta groups of the Bw'e. The investments and reconstructions were prepared independently with the help of railway construction offices (EVDR).

Administration of operations and traffic

Management of signaling and telecommunications systems

President of the Management

On January 1, 1994, the Reichsbahndirektion Schwerin ceased operations, the administrative apparatus was transferred to Deutsche Bahn Aktiengesellschaft with the areas of local transport, long-distance transport, DB Cargo and network.

In the pre-war period, the Reichsbahndirektion Schwerin mainly used light locomotives. In 1936, for example, there were 37 locomotives of the 91 19 series (formerly Mecklenburgische T 4) and 35 locomotives of the 75 4, 10-11 series . The reasons for using these locomotives were the lower train density and the lighter trains compared to other administrative districts. The total number of steam locomotives in 1936 was 222 machines and rose to 234 machines by 1940.

The building of the Reich Railway Directorate 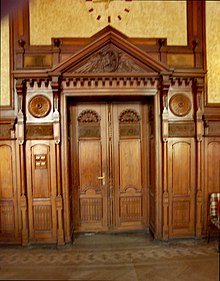 Paneled door of the Great Boardroom

Ceiling painting by Güstrow in the large conference room

The building, inaugurated on August 12, 1898, was used as a functional building by approx. 800 employees until 1996 for the purpose of managing 23,000 railway workers from the entire railway administration. It is a three-story red brick building, a former two-tower winged building decorated with classical sandstone ornaments. In 1922–1925, a four-storey, plastered supplementary building that did not impair the facade was added. The three-storey administration building had a canteen in the basement, a vault (steel door approx. 40 cm thick, Reichsbank reserves used to be stored here), several air raid shelters with an entrance to the underground bunker, which was located under the forecourt on the left. In the event of war, the management could be forwarded to the underground bunker, all prerequisites were in place. The bunker was removed in the 90s. The Reichsbahnsparkasse was in the entrance hall on the ground floor. The representative staircase with granite columns and wide stairs brought the visitor on the first floor into the large conference room. A high lead-glazed room decorated with wood paneling and historical city, port and train station images. A coat of arms frieze of all cities on the Mecklenburg Friedrich-Franz Railway completes the wall paneling to the coffered ceiling. On the same floor, in the same style, there is a small conference room with a connecting door to the presidential room, which used to have a wrought-iron balcony facing the forecourt. The second floor had special rooms for a vice president and the political department. The Soviet traffic command had seized a side wing in 1945, from here it regulated its military transports. In the stairway to the third floor there is a lead-glazed window several meters in size with the ducal coat of arms of Mecklenburg. This largest coat of arms of Mecklenburg was secured at the request of the civil rights activists of the round table of the Rbd in the autumn of 1989 and restored in 1990 in accordance with monument conservation. The political greats of the working class made no sense to these beauties. A very elaborate crystal chandelier was hung to complement the end of the stairwell on the third floor. Opposite the staircase was the management's specialist library. The company kitchen in the cellar of the house took care of the physical well-being, staff from the management and the offices as well as the drivers were able to receive food almost around the clock. In the 1980s, a company canteen with a bowling alley was built on Dr.-Külz-Strasse. This kitchen construction gave way to the branch office of the Federal Railway Office for Railway Systems in MV that exists there today.

Social facilities of the Rbd-Haus Schwerin at the Schwerin site

Part of the social measures was the opportunity to send railway children to the company's own holiday camps in the summer.