Robert Devereux, 3rd Earl of Essex ( January 11, 1591 - September 14, 1646 ) was an English peer , officer and politician. He took part in various military ventures. Politically, he was often in opposition to Charles I. At the beginning of the English Civil War , he was the first commander in chief of the parliamentary army. After the experience of that time, the creation of the New Model Army began against his will . 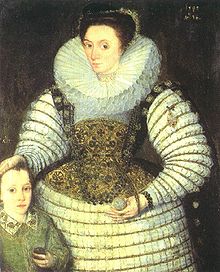 He was the son of the father of the same name Robert Devereux, 2nd Earl of Essex and the mother Frances Walsingham. This was the daughter of Francis Walsingham . The father was ostracized and executed on charges of high treason in 1601 . At the time, his son was only ten years old. On April 18, 1604, his father's ostracism was revoked, so that his father's titles of nobility were restored for him as 3rd Earl of Essex . He was at Eton College educated and studied at Merton College of Oxford University .

James I arranged Essex's marriage in 1606 to Lady Frances Howard , daughter of Thomas Howard, 1st Earl of Suffolk . His wife soon began a relationship with Robert Carr , who was a favorite of the king. In 1613, the king set up a commission that made the divorce possible. The reason given was the husband's impotence . Frances Howard was able to marry Robert Carr. This was also raised to the Earl of Somerset .

In 1620 he joined the English army. During the Thirty Years' War under Horace Vere he served as regimental commander in Holland. Among other things, he took part in the unsuccessful attempt to bring relief to the besieged Breda . In 1625, as Vice Admiral, he was one of the commanders of the failed expedition to Cádiz as part of the Anglo-Spanish War . Because he criticized the Duke of Buckingham as a driving force after the expedition , Essex was not given command of a force sent to Denmark. In 1627 he refused a regimental command of the troops who were supposed to come to the aid of the besieged La Rochelle .

In the House of Lords he rejected the king's increased tax payments in 1626/27 and supported the Petition of Right in 1628. In January 1631 he married Elisabeth Paulet. The marriage broke up six years later because of the wife's infidelity. A child from the fraternity, Robert Devereux (1632–1638), he recognized as his own, but this died shortly afterwards.

In 1639 Charles I appointed him Deputy Commander of the English Army in Scotland during the First Episcopal War because of his military experience . Essex held the actual leadership in place of the nominal commander. At the instigation of the queen, who wanted to get one of her favorites to the post, he lost this prominent position. The king distrusted Essex because Scottish leaders turned to him to use his influence over Charles I to stop the advance.

Opposition in the House of Lord

During the brief parliamentary period , Essex was among a minority in the House of Lords who refused to raise funds for the war against Scotland until Parliament's complaints were resolved.

During the second episcopal war in 1640 he received no command, but was part of the delegation to the conclusion of a peace treaty. In the long parliament of 1640, Essex was a leading opposition lord. He worked closely with John Pym , the leading figure in the House of Commons . This applies to the indictment against the Earl of Strafford or to the removal of various institutions that the king had built during his rule without parliament.

The king tried to win Essex to his side and took him along with other opposition lords in 1641 in the Privy Council . Essex was appointed Lord Chamberlain of the Household and commander of all troops south of the River Trent .

In January 1642 he learned of the king's plan to arrest the five leading opposition leaders in the House of Commons. He warned them and the plan failed, Essex refused to join the King in York and then lost his post as Lord Chamberlain. Essex was the first lord to accept the Militia Ordinance , which was intended to remove control of the militia from the king.

Commander of the Parliamentary Army

He became a member of Parliament's Security Committee in 1642 and first Lord General or Captain-General of the Parliamentary Army. He did not want to use the army primarily offensively against the king, but wanted to use it first as a means of pressure to force Charles I to make concessions. This earned him criticism from more radical forces.

When the royal army marched on London, he wanted to stop them with the parliamentary troops. On October 23, 1642, the battle of Edgehill was undecided . However, the battle was very costly to the Essex Army. During the battle, Essex stood at the head of an infantry regiment, pike in hand. He could not prevent the king from marching on towards London. But he managed to be near London before the king and to take up a strong defensive position at Turnham Green with 24,000 men. The royal troops were much weaker and had to withdraw after a brief battle. Together with other commanders, it was possible to stop the king's advance into London. He has been criticized for refusing to pursue the royal army.

Because peace negotiations were in progress with the king, he hesitantly began the campaign of 1643. That year he besieged and captured Reading . However, he did not attack the royal headquarters in Oxford . It played a role that an epidemic broke out in the army and the wages were not paid. The criticism of his warfare grew louder and he offered to resign, which was refused to him by parliament.

In July 1643 he reported to parliament about the poor condition of the army as a result of the epidemics and desertions. He concluded that peace with the king was the only hope. His critics saw it as the beginning of the transition to the king's camp. Pym set up a parliamentary commission to examine Essex's complaints. Among other things, funds for the army and better armament were subsequently decided.

Later that year he was able to lift the siege of Gloucester . On the way back to London he was successful in the first Battle of Newbury . In doing so, he ended a streak of success for the royalists and helped build public support for the cause of Parliament.

After Pym's death, Essex lost its main political support. In 1644 he brought support to Lyme , captured Taunton, and marched towards Exeter . The royal troops had since recovered and defeated units of the parliamentary troops at Cropredy Bridge . Essex could no longer count on the support of these troops. His attempt to move towards Falmouth failed and he was cut off at Lostwithiel . The attempt to save the troops from the sea failed. He was defeated by royal troops on August 21, 1644 at the Battle of Lostwithiel . Essex fled across the sea just before the remnants of his army had to surrender.

As a result, Essex received no more command and resigned. He remained a member of parliament and mainly devoted himself to veterans affairs. He also stood out as an opponent of Oliver Cromwell . He was a leader in the House of Lord against reforming the army into the New Model Army . But he could not prevent the Self-Denying Ordinance , which said that a member of parliament was not allowed to take over a command post.

Since he had no male offspring, his earl title expired. His subordinate title Viscount Hereford was inherited by his second great-nephew Sir Walter Devereux, 2nd baronet . His subordinate baron titles Baron Bourchier and Baron Ferrers of Chartley fell into Abeyance .