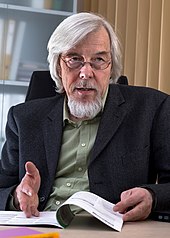 Rolf-Dieter Heuer studied physics and obtained his diploma from the University of Stuttgart . In 1977 he was at the University of Heidelberg under Joachim Heintze with a thesis on the neutral decay modes of the (3686) resonance ψ doctorate .

After that he worked first in the JADE collaboration on the electron-positron storage ring PETRA of the German Electron Synchrotron (DESY), then from 1984 on the OPAL experiment at CERN. From 1994 he was spokesman for the OPAL collaboration there. In 1998 he returned to DESY and the University of Hamburg, where he became a professor. From 2004 up to and including 2008 he was research director for high energy physics at DESY. There he was responsible for research at the HERA accelerator, the collaboration between DESY and the LHC particle accelerator at CERN in Geneva , Switzerland , and for research on future electron-positron colliders.

In January 2009 Rolf-Dieter Heuer succeeded Robert Aymar as General Director of CERN. His tenure ended in December 2015, and Fabiola Gianotti , an Italian physicist, became his successor.

From April 5, 2016 to April 9, 2018, Heuer was President of the German Physical Society (DPG). He replaced Edward G. Krubasik . With the election of Dieter Meschede as his successor, Heuer took over the vice-presidency of the DPG, which lasted until March 31, 2020.