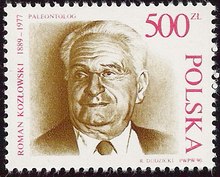 Roman Kozłowski on a Polish postage stamp from 1990

Roman Stanisław Jakub Kozłowski (born February 1, 1889 in Włocławek , † May 2, 1977 in Warsaw ) was a Polish paleontologist and professor at the University of Warsaw .

After attending the commercial college, Kozłowski studied geology in Freiburg and at the Sorbonne in Paris . Immediately after graduating in 1910, he began paleontological work at the Muséum national d'histoire naturelle . In 1913 he was appointed lecturer at the mining school in Oruro ( Bolivia ), where in 1916 he was entrusted with the post of director of the geology department.

In 1921 he returned to Europe and began in Paris with his dissertation on Devonian fossils from the Bolivian Andes , which he completed in 1923. Then Kozłowski went to Poland and received, after an interim position as a lecturer at the Polish Free University ( Polish Wolna Wszechnica Polska ), the chair of paleontology at the University of Warsaw in 1927, which he held until his retirement.

Zofia Kielan-Jaworowska is one of his doctoral students .

The focus of his work was the research of graptolites , especially from the Heiligkreuz Mountains . The excellent, partly three-dimensional, preservation of these fossils in the rocks of the lowest Ordovician provided important insights into the phylogenetic development of this extinct group of animals and allowed Kozłowski to classify them among the Hemichordata .

Kozłowski received honorary doctorates from the Universities of Cracow , Paris and Modena , he received the Mary Clark Thompson Medal of the National Academy of Sciences in 1958 and the Wollaston Medal in 1961 . In 1958 he became an honorary member of the Paleontological Society . In 1964 he was accepted as a corresponding member of the Académie des sciences . He has also received numerous awards from the Polish state, including the Order of Polonia Restituta . Posthumously he was honored with a stamp by the Polish Post Office.