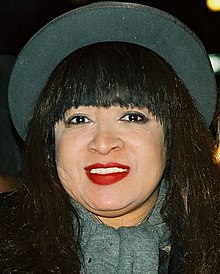 Ronnie Spector (born August 10, 1943 as Veronica Yvette Bennett in Washington Heights , New York City ; died January 12, 2022 ) was an American singer . She rose to prominence as the lead singer of the girl group The Ronettes and has also found success as a solo singer and in collaborations with other musicians.

Ronnie Spector was born Veronica Bennett in 1943 in the Washington Heights neighborhood of East Harlem , New York . Together with her older sister Estelle (1941-2009) she appeared as a singer at an early age. In 1957, together with their cousin Nedra Talley, they formed the girl group Darling Sisters , later renamed The Ronettes . With the group, Bennett celebrated her greatest successes as lead singer. She was nicknamed the Bad Girl of Rock 'n' Roll by the press and critics .

After the group broke up in 1966, Ronnie married her manager Phil Spector in 1968 and tried her hand as a solo singer. In 1971 she released her first song , Try Some, Buy Some , written by George Harrison . In 1974 she divorced her abusive husband, who, according to his own statement, had temporarily locked her in the villa they shared and threatened to kill her if she tried to escape. The couple had been separated since 1972. She sued Phil Spector for unpaid royalties on her recordings; after 15 years of legal proceedings, she was awarded two million US dollars.

In the 1970s, Spector rejoined with the Ronettes for a revival under a new lineup. In 1976 she released the duet You Mean So Much To Me with Southside Johnny & the Asbury Jukes , which appeared on their debut album I Don't Want to Go Home . In 1980 her first solo album Siren was released .

In 1986 she released the song Take Me Home Tonight with Eddie Money , in which she sang the lyrics Be My Little Baby (a reference to Be My Baby by the Ronettes) in the chorus. She is also mentioned by name in the lyrics of the song. The song reached number four on the US charts and helped her regain her popularity. A year later, Spector released her second solo album, Unfinished Business . The first song Who Can Sleep featured Eddie Money as a guest vocalist.

In September 1990 she published a 318-page autobiography entitled Be My Baby: How I Survived Mascara, Miniskirts, and Madness, or My Life as a Fabulous Ronette . In 2012 the book was ranked 15th in the list of 25 Greatest Rock Memoirs of All Time by the music magazine Rolling Stone .

Another solo album was released in 1999 entitled She Talks to Rainbows . In 2003 she was a backing vocalist on the Misfits' Project 1950 album . In the years that followed, she released more solo albums and extended plays . In August 2017 the single Love Power was released under the name Ronnie Spector and The Ronettes .

She adopted three children with her first husband Phil Spector. In 1982 she married Jonathan Greenfield, with whom she had two children. She last lived in Danbury , Connecticut and died of cancer in January 2022 at the age of 78 surrounded by her family.