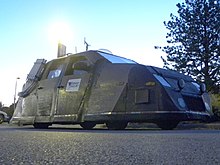 SRV Dominator is the name of a series from three armored vehicles for the Stormchasing that of Reed Timmer , a US storm chaser and a member of TornadoVideos.Net teams, have been developed. SRV stands for Storm Research Vehicle .

In 2013 Reed Timmer joined the KFOR TV storm chasing team 4WARN Storm Team with the vehicles , before that the first two Dominator vehicles were shown in the Discovery Channel series Crazy About Tornadoes .

This first vehicle is a modified 2007 Chevrolet Tahoe that was used in the 2008 tornado season and debuted as the Dominator in the 2009 season . The vehicle is protected against debris thrown up by tornadoes with metal panels and additional polycarbonate windows, as well as an external roll cage and seat belts similar to those found in NASCAR vehicles. In contrast to the Tornado Intercept Vehicle, the Dominator is not intended to drive directly into tornadoes or to allow them to be pulled over you, as it lacks appropriate anchoring devices, among other things. But it is possible to get very close to tornadoes.

In 2009, a tornado intensified in Nebraska directly above the Dominator, with the driver's side window breaking because the external polycarbonate window could not be closed. Reed Timmer and one of his passengers were injured by broken glass.

After the 2008 season, the armor of the vehicle was reinforced and it was equipped with a radar to create profiles of winds at different heights within tornadoes. In addition, it received launch tubes operated with compressed air for measuring probes that are shot into tornadoes.

In the 2011 season, the vehicle was increasingly struggling with technical problems, including brake and hydraulic failures, and the polycarbonate window on the driver's side could no longer be completely closed.

In 2011, Reed Timmer and the other members of TornadoVideos.Net bought a GMC Yukon XL to convert it into a second Dominator. Differences to the first Dominator include the flexible fuel engine, improved aerodynamics and rotating rear seats. In addition, the Dominator 2 has stronger armor and can anchor itself to the ground with hydraulic supports, which means that it can withstand significantly stronger tornadoes than the first Dominator. Reed Timmer said that both Dominator vehicles would also be used at the same time, with one going into the tornado to collect data while the other collecting data outside of the tornado.

On May 31, 2013, the Dominator 2 was damaged when it struck a multivortex tornado near El Reno , Oklahoma . With a diameter of up to 4.2 kilometers, this tornado was the widest tornado since records began and reached speeds of more than 470 km / h, making it the largest and most violent tornado ever hit by a Dominator vehicle. This tornado was also responsible for the deaths of three storm chasers from the TWISTEX team, including Tim Samaras , who did not have an armored vehicle.

A third Dominator was completed at the end of April 2013. This uses a Ford Super Duty pickup as the basis . The vehicle has an electric cable winch , wing doors and hydraulic supports for anchoring the vehicle. It is also the first Dominator with a diesel engine . It was first used during the tornado outbreak May 18-21 , where it ran three times into an EF4 tornado near Shawnee , Oklahoma.