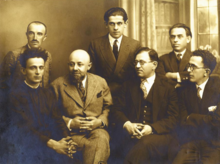 Reisen received the traditional training of a Jewish boy, then attended middle school and then devoted himself to literary studies. In 1914 he worked for the Warsaw Frajnd and from 1916 to 1918 was the editor of the last Najeß in Vilnius . In 1919 he became editor of Wilner Tog, founded by Samuel Niger , which he took over as editor-in-chief after his departure for America and which flourished as an independent magazine in which socio-cultural questions of Judaism were discussed at a high level.

Since then, Reisen has devoted himself particularly to Yiddish linguistics (grammar, orthography reform, including pedagogy) and literary history. He wrote for a large number of Yiddish newspapers, was chairman of the Jewish Association of Letters and Journalists and the Jewish PEN Club in Vilnius, and was the founder and supervisor of the reference works published in cooperation with Niger. Together with Max Weinreich , he then served for a while as director of the Jewish Scientific Institute (YIVO) in Vilnius and was co-editor of its Jewish Philology and Philological Writings, in which he himself published several linguistic works.

Since the end of the 1920s he made several lecture tours to Russia and America, during which he became involved in Yiddish literature and recruited friends and sponsors for the YIVO. After the Soviet occupation of Lithuania, he was arrested in Vilnius in 1941 and has been missing ever since.

Salman Reisen was the brother of Abraham and Sara Reisen .