The title of this article is ambiguous. For the Dutch-Russian engraver with this family name, see Adriaan Schoonebeek (1661–1705).

Schoonebeek is a place with 4,860 inhabitants (as of January 1, 2018) in the municipality of Emmen in the Dutch province of Drenthe . Schoonebeek is also called Oud-Schoonebeek , as the town of Nieuw-Schoonebeek , which also belongs to Emmen, is in the immediate vicinity.

Schoonebeek is located east of Coevorden directly on the German border at Schoonebeker Diep , which forms the border between the Netherlands and Germany here. The neighboring municipality on German territory is Emlichheim .

From 1943 to 1996 petroleum was extracted in the municipality . In 1976 there was an oil spill that caused extensive damage. In 2006 it was investigated whether it would make sense to resume oil production, and in 2008 drilling was resumed. Oil has been produced again since 2011 and transported to Lingen in Germany via a 45 km pipeline . There, the further processing takes place in the Emsland oil refinery from BP . 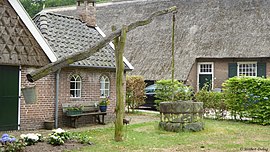