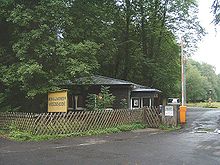 The Jasper Trondell also doubles as an outdoor classroom . 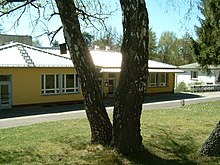 The Wegscheide school camp (also known as the Wegscheide Children's Village ) in the city of Frankfurt am Main is considered the largest camp site in Germany. It is located on the Wegscheideküppel in the Spessart , 4.5 kilometers southeast of Bad Orb in the Hessian Main-Kinzig district . The school camp Wegscheide has 23 residential units on an area of ​​35 hectares.

Shortly before the beginning of the First World War in 1914, a military camp was set up on the Wegscheideküppel; the area was part of the planned military training area Villbach - Lettgenbrunn , which however hardly got beyond the preparatory activities at the crossroads. A military camp (more like a military depot ) was built, consisting of a series of wooden barracks and three permanent houses that had served as horse stables. During the war, numerous young men were trained as soldiers here . In contrast, the Villbach-Lettgenbrunn bombing site was used as such both before and during the two world wars ( Rothenbergen Air Base ).

After the First World War, August Jaspert looked for a place to relax for children who were suffering from the consequences of the war on behalf of “Frankfurter Kinderhilfe”. This place seemed suitable to Jaspert to help realize his idea of ​​a children's recreation camp. He was supported by Wilhelm Polligkeit (1876-1960) and donations from Frankfurt citizens, including Willemine von Weinberg, Arthur von Weinberg's wife , after whom the house she donated was named in 1929 and a Frankfurter Strasse.

From August 20, 1920, tens of thousands of Frankfurt children visited the Wegscheide Children's Village as part of a school trip or holiday . By 1952 alone there were just under 120,000. 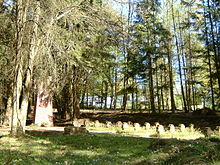 From November 1939 until the end of the Second World War in May 1945, Wegscheide was a so-called main camp for prisoners of war (Stalag) of the German Wehrmacht . Most of the prisoners were used as forced labor with the farmers in the region or in factories as far as Frankfurt. While French , British and Poles were initially in the camp, by mid-1941 most of the camp inmates came from the Soviet Union . Their care and accommodation was inhumane. Even today, about one kilometer south of the Wegscheide, the Wegscheide forest cemetery , where 1,430 Soviet prisoners of war are buried in mass graves, is evidence of this .

From 1945 to 1955, the Wegscheide camp served as a refugee camp for displaced persons from the former German eastern regions . At times up to 3,000 people lived in the barracks and stone houses. A cemetery for refugees is located to the west of the road.

Re-establishment as a school camp

As early as 1949, Frankfurt schoolchildren and their teachers came to visit for the first time. During this time, refugees were still housed in the houses at the main entrance. The Frankfurt school department head Heinrich Seliger was particularly committed to bringing the school camp back into operation in order to create a place to relax in the great outdoors for the children and young people in the badly damaged city. Since 1949 6,000 to 7,000 schoolchildren, mainly from Frankfurt am Main, have been visiting the Wegscheide Children's Village every year.

Since the 1980s, both the existing buildings and the concept have been modernized on the way. In addition to new occupancy houses the construction of a Home wastewater treatment plant and a wood chip - heating system and the installation of solar panels to name. Today groups can choose from a wide range of environmental and experiential educational projects. Children and young people can move around freely in the demarcated area without car traffic.