Differentiation of the vibrating from the static load

The loading of a component or a material sample can be static or dynamic. In the case of static loading, material parameters such as the yield point or tensile strength can be determined in a tensile test . Static load here means the load on a body (object) with a constant force from a constant direction. As an example, placing a stone on a table is mentioned here. The stone has a constant mass and exerts a constant force on the table due to the acceleration of gravity . If the force exceeds a certain value, the table will collapse.

In the case of dynamic stress, however, the component is subjected to load changes, and the permissible stress in a material drops: A break can occur even if the tensile strength has not yet been reached and often without leaving the linear-elastic range of the stress-strain diagram . A screw that z. B. is used to attach an exhaust to the vehicle, can break due to the vibrating load of the vehicle movement, although the actual yield point was not reached. This effect can be intensified by corrosion and / or temperature changes. Such problems arose for the first time with the advent of the railroad. According to static calculations, the wheels of the wagons should have easily absorbed the stresses while driving without being damaged in the process. However, more and more railroad cars failed because the axles were broken. August Wöhler investigated this phenomenon from 1858 and discovered that oscillating loads can damage a component even if it is obviously not damaged by a single load with the same force.

The dynamic loads are usually understood as vibrations . A wheel set shaft of a railway wagon experiences, for example, a periodically oscillating load when rolling, since each revolution represents a load change. But also non-periodic loads, such as switching on and off, can be viewed as oscillating stress.

Wöhler line and differentiation between short-term, long-term and fatigue strength

For the construction and dimensioning of a component that is subject to an oscillating load, it must be known how many load changes it can survive before it breaks. This property is examined in the Wöhler test , which is standardized according to DIN 50100. For this purpose, the test bodies are cyclically loaded with high-frequency pulsators, mostly with a sinusoidal stress-time function. Depending on how the experiment is carried out, the stress can arise from tensile / compressive loads, bending , torsion or shear forces. Load amplitudes and the stress ratio between underload and overload (the so-called degree of rest ) are constant. The test runs until a defined failure (breakage, crack) occurs or a specified number of limit cycles is reached. Test specimens that reach the limit number of cycles without recognizable failure are referred to as runners.

The maximum number of load changes for a certain load amplitude can be read from the Wöhler diagram. It depends on the material properties (cyclically hardening / cyclically softening), the force or the resulting tension and the type of load (increasing pressure load, increasing tensile load or changing load). With the same displacement amplitude, the changing load damages the component the most.

Qualitative representation of the Wöhler line with identification of the areas K, Z and D

In the Wöhler diagram, the nominal stress amplitude is usually plotted linearly or logarithmically over the logarithmically represented, tolerable number of cycles . The resulting curve is called a Wöhler curve . Because the range of fatigue strength is a straight line in a double logarithmic representation, the term Wöhler line has also established itself. If you look at a Wöhler curve (right), you will notice three different areas of the graph, which are referred to as short-term strength K, long-term strength Z and fatigue strength D.

Occasionally, the probability that a component will break is also of interest. For this purpose, the Wöhler diagram is expanded to a three-dimensional coordinate system. The values ​​of deflection stress , number of load cycles and probability of breakage are plotted on the axes; the mathematical description is based on a scatter band function (SBF). This SBF has six constants, which are determined from the flat Wöhler diagram and the scatter of the fatigue strengths. The most important result from the SAQ is the so-called zero break line , the probability of which is set individually with the help of the confidence intervals (e.g. 1 ppm, 10 ppm). With this evaluation of the single-stage Wöhler test it is also possible to make statistically reliable statements about the development of the breakage probability under multi-stage operating load. Influences of the medium voltage are taken into account in the statement on the probability of breakage, influences of the environment such as temperature fluctuations or corrosion usually have to be considered separately.

Below a certain maximum load and without the occurrence of time-dependent damage mechanisms (e.g. corrosion), some materials can (theoretically) withstand an infinite number of vibrations (load changes). Components that are subject to real operational use show this behavior only in exceptional cases and under certain conditions. In most cases, the component is not designed to be fatigue-resistant, but to be operationally stable. In addition, materials with a face-centered cubic crystal lattice, including many non-ferrous metals such as aluminum , do not show a limit cycle number . Here, even with low load amplitudes and high numbers of load cycles, symptoms of fatigue are to be expected. The same applies to high-strength steels: So derailed in 2008. ICE 3 in Cologne's main train due to breakage of the axle , which with over 10 9 had far exceeded load changes the usual limit numbers of cycles for fatigue strength.

The fatigue strength depends on the type of load that occurs. Depending on whether the type of load consists only of pressure, tension and pressure, only tension or also bending and torsion , their respective levels change. In addition, the static rest load, the so-called medium voltage , must be taken into account. It has an enormous influence on the behavior of the material. Depending on the medium voltage, one speaks of alternating strength or threshold strength:

Haigh diagram: The curve drawn in red encloses the range of fatigue strength 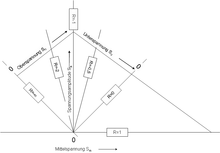 Detailed sketch of the straight lines, which each have a constant stress ratio R = const. describe, each with different values ​​of R, as they appear in the Haigh diagram

The fatigue strength can now be read for any voltage ratio. For this purpose, the tension relationship with

Then the straight line assigned to this stress ratio (for examples of such straight lines see picture on the right) is followed up to the limit of the fatigue limit.

Fatigue strength diagram according to Smith

Often a component or an assembly is not designed to be durable, but rather operationally. You are in the area of fatigue strength , where only a certain number of load changes can be endured between tensile strength and fatigue strength. The number of endurance cycles of a component under operational load (variable load amplitudes) up to failure can be predicted within the scope of statistical accuracy with the help of the Wöhler curve. To do this, the methods of linear damage accumulation according to Palmgren, Langer and Miner are used. At the same time, intensive experimental tests are used to verify the computational results. Fatigue strength is used today in almost all areas of technology for the purpose of lightweight construction.

Components that are not fatigue-resistant but operationally stable require less material and therefore have a lower mass. A lighter vehicle , for example, has lower fuel consumption, a lighter structure allows a higher payload. Occasionally, the operational design also serves to fulfill the function: Durable aircraft would not be able to fly because they would be too heavy.

In reality, impact loads and environmental conditions such as temperature, pressure, corrosion, stone chips, precipitation, creep and aging of the material also flow into the consideration of operational strength. It is also important to distinguish between purpose-oriented operation and abuse. A solid component is only designed up to a certain vibration or impact amplitude and may fail after this limit load is exceeded. Ideally, a safety-relevant component fails only through deformation and not through breakage, in order to ensure residual safety and reduce the risk of an accident. Special events play a major role in the testing of components, since these stresses must be withstood by the operationally stable component without damage. However, these loads only occur in exceptional cases within the calculated service life and are not misused due to the mean amplitude strength. 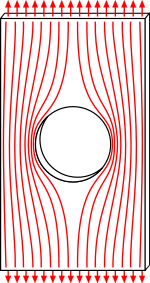 While the Wöhler test shows a uniaxial stress state with tensile / compressive load, in reality multi-axis stress states with bending , torsion and shear force are to be considered. In order to be able to continue using the test results of the materials testing, the equivalent stress for the respective component must be calculated. In the case of oscillating loads, the shape change energy hypothesis (GEH) is the most frequently used tool.

If a concrete component is fatigue-resistant, it is called design fatigue strength. As a rule, a Smith chart is used as the shape fatigue strength diagram, in which reductions in the safe area due to the influence of size and surface as well as the notch coefficient are entered.

Component Wöhler tests are carried out as proof of strength for components manufactured in series production as well as safety-relevant components such as bogies . 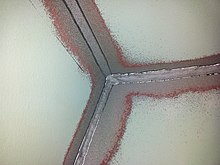 The durability and life brandishing loaded welded metal structures is in many cases by the welds - determined - in particular the weld transitions. Targeted post-treatment of the transitions by grinding , blasting , shot peening , high-frequency hammering, etc. can significantly increase the service life of many constructions with simple means. With high-frequency hammering , the increase in fatigue strength is essentially based on the introduction of compressive residual stresses to increase the resistance to crack formation and crack propagation by superimposing the notch stresses with compressive residual stresses , a reduction in the notch effect and a strengthening of the surface layer.