The yield point is often not clearly identifiable or not pronounced in the tensile test . Then “yield strengths” are used instead (see below, for example the frequently used 0.2% yield strength).

The characteristic values ​​corresponding to the yield point for other types of material stress are called crush , bending and torsion limit , which are also summarized under the umbrella term flow or elasticity limits. The greatest technical importance, however, is the yield point.

The yield point is to be determined by means of a tensile test .

This gives the designer information about the distance between the onset of plastic deformation and failure of the material under quasi-static loading. The value plays an important role in screw connections , for example , where a higher value is generally desired, since permanent elongation after a load would mean loosening of the screw.

In the case of technical materials, instead of the yield point, the 0.2% yield point or elasticity limit is usually specified, since (in contrast to the yield point) it can always be clearly determined from the nominal stress-total elongation diagram (often the yield point is actually meant, if the yield point is specified). The 0.2% proof stress is the (uniaxial) mechanical stress at which the permanent elongation (i.e. plastic elongation, hence the index ) based on the initial length of the specimen is exactly 0.2% after unloading .

At even higher loads , permanent plastic deformation occurs or the tensile strength is exceeded and the material fails due to breakage .

For example, if a climbing rope made of polyamide (" nylon ") is put under tension, it will initially stretch by around 10%. If it is relieved, it will be shortened to its original length (elastic stretch below the yield point).

If the rope is more heavily loaded and if it stretches beyond the yield point, then it does not shorten completely even after the load is removed .

If it is loaded even more, the flow limit will be exceeded at some point . Then the material begins to change in spite of the constant force , it flows (= rearrangement of the molecular chains). 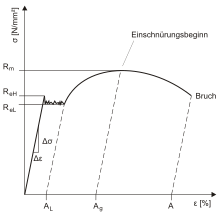 By impurity clouds, also Cottrellwolken which preferably in energetically favorable distortion fields around dislocations stop, there may be formation pronounced yield point. The following yield point effects in particular occur:

The upper yield point (index = high = high, above) is caused by dislocations breaking loose and leaving the interstitial foreign atom clouds. Then the stress in the material drops to the lower yield point and the deformation continues with the Lüders elongation.

This effect only occurs with unalloyed steels with a low carbon content.

The lower yield point (index = low = low, below) is the result of dislocations tearing away in von Cottrell clouds . These dislocations can now be moved with significantly less energy, since the foreign atom clouds are no longer in the distortion range of the dislocations. This effect is a consequence of the occurrence of an upper yield point and at the same time the nominal stress at which the Lüders elongation takes place.

As Luders strain  ε L (after Klaus Lüders ) is a plastic strain component referred to, which is characterized by the movement of a displacement front through a component or a sample at constant stress. During the Lüders deformation, the nominal stress (and thus the applied force) remains almost constant at the lower yield point. The Lüders front is usually triggered by a local excessive stress ( notch , surface roughness , cross-sectional transition ) and then moves through the entire sample measurement section or up to a significant increase in cross-section. The deformation lines visible on the surface of a component are known as Lüders bands or flow figures .

This effect occurs in unalloyed and low-alloy under eutectoid steels, but also in copper and aluminum alloys, and is independent of the occurrence of an upper yield point.

If a sample is once stretched beyond the range of the Lüders elongation, then if the sample deformation is repeated in a timely manner, no more yield point effect or no more Lüders elongation occurs, since the dislocations have already torn away from the foreign atom clouds. For this reason deep-drawn sheets are often cold-rolled in advance in order to prevent the formation of flow shapes during the actual deep-drawing.