A segment display is able to show letters, numbers or characters through electronic or electromechanical control of one or more of its segments. There are many different types of segment displays, which differ in the number and arrangement of their segments. The most important is the seven-segment display , which z. B. is used in digital watches or pocket calculators and all digits from 0 to 9 are composed of up to seven individual "lines".

An extension of this segment display leads to the fourteen- segment display, which also contains additional diagonal and vertical segments. This is rarely implemented as a sixteen-segment display. These two segment displays offer the advantage of being able to display all capital letters of the Latin alphabet and some special characters, such as "+" and "*". In English, these displays are often also called a starburst display , Union Jack display or British flag display because of their appearance .

Other further developments sometimes have significantly more segments, for example 38, 88 or 111 in the widespread Geascript family from BMG / MIS. The high level of legibility in particular ensures that this technology can hold its own in certain niches, such as parking guidance technology , against matrix displays with more flexible design options.

Arrangement of the segments a to g

A seven-segment display is a display element made up of seven separately switchable, visible bars that are arranged in the form of two superimposed, often square rectangles. Usually the segments are labeled with the small Latin letters a through g , starting at the top, proceeding clockwise, and naming the middle segment last.

It is mainly used to represent the decimal digits zero to nine, for example in pocket calculators or digital clocks , but sometimes also on non-electronic display boards, for example for lottery jackpots . The representation of the digits is abstracted here, so not quite perfect compared to the "normal" font (particularly striking examples are the digits 4 and 7 ). Due to the widespread use of seven-segment displays, this abstraction is hardly noticeable in everyday life.

In addition, a point is often integrated as a comma symbol to the right or left of the number. This particular segment is often referred to as dp for decimal point .

Since most systems today work with a data width of 8 bits or a multiple thereof, most display elements still have an eighth "element" in the form of a point on the baseline to the right of segment  d (right, because there, due to the mostly italic alignment of the character is more space than there is on the left). The point is controlled via an eighth data bit and mostly serves as a decimal separator , but is also used quite differently depending on requirements.

Scheme of the segment arrangement from Frank W. Woods advertisement, 1908

As early as June 17, 1908, Frank W. Wood had an eight-segment display patented that contained an additional diagonal segment to display the number four (patent number US 974,943, issued November 8, 1910). Segment displays did not become more widespread until the 1960s with the advent of fluorescent and LED displays. Before the breakthrough of LED technology there were in the 1970s precursor in the form of numeric display tubes in filament technology - only Numitrons in tubular housings, then Minitrons (like the later LED versions) in plastic packages - or as a gas discharge tube .

The representation of letters ( Latin , Greek , Cyrillic ) is possible to a limited extent. Good legibility can be achieved by using mixed lower and upper case letters. For example, the letters ‹A›, ‹C›, ‹E›, ‹F› and ‹G› can be used relatively well to represent hexadecimal digits .

For some digits there are variants with one segment more or less: a in ‹6›, and d in ‹9›. In safety-critical areas, a design makes sense in which the failure of any segment does not mean that one digit looks like another (e.g. '9' or '6' to '5'), but rather that the defect is noticed. In addition, preferences from the local handwriting can also be decisive.

With some CD players , status information is provided on a seven-segment display: 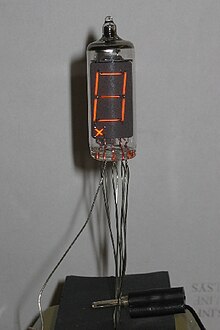 Seven segment numitron tube. Each segment consists of a glowing filament of a light bulb - one of the first seven segment displays.

Today, the segments are usually made up of light-emitting diodes (LEDs) or liquid crystal displays (LCDs). In the case of very large-format displays, fluorescent tubes are also used to form the segments. With LEDs there are single-digit displays, which differ technically like matrix displays by a common anode or common cathode . The decimal point is partly controlled in a dedicated manner.

To control seven-segment displays made of LEDs or LCDs, integrated seven-segment decoder circuits (ICs) are usually used, which recode binary-coded numbers (4 bits) to seven bits to control the seven segments. In discreet clocks from the 1970s, TTL and CMOS modules from the 74xx and 40xx series from various manufacturers, mostly the types ending with 46 ... 49, 247 or 4511, are used. These are BCD decoders that are based on the principle of demultiplexers, followed by multiplexers recoded with additional non-gates and AND gates and an integrated output driver . Depending on the component, TTL output drivers with an open collector of up to 30 volts were used. With CMOS outputs, their short-circuit strength is used and small LEDs are often controlled without additional components. Some of the circuits also offer the "lamp test" function, in which all outputs are activated. A blanking by deactivating the module or its outputs is assigned to a further connection.

Numbers made up of several digits can be controlled using the time division multiplex method, which means that an additional decoder circuit is not required for each digit. The disadvantage here is the flickering of the display at low frequencies and the sometimes reduced brightness of the display, since it is not permanently controlled. Another method is control via shift registers , which requests the processor and 2 to 3 connections to control the display and which keeps wiring harnesses thin.

Control of several displays with microcontrollers

While the display of several digits with counter ICs is quite unproblematic, the number of necessary I / O connections becomes critical when using microcontrollers. So has z. B. a digital clock (without seconds display) 28 light-emitting diodes (or 27, since the tens hour digit does not need a segment). The number of 16 is also quite high when using driver ICs. This can be remedied by not permanently connecting the common connection of a digit to the supply voltage, but by controlling the digits one after the other. Then the seven separate connections of all digits can be grouped together. This means that I / O connections are required for digits , e.g. for a 4-digit digital clock. B. 11 connections (see multiplexer ). This results in a lower brightness, which can be compensated for by smaller series resistors if necessary. However, this can damage the display in the event of software errors. This method also results in a visible flicker when the display is filmed with television cameras (similar to filming screens).

A better, but more complex method is to connect a driver IC with a built-in register (e.g. 4511) to each digit. The microcontroller can then select the digit to be changed via the memory input and change it as described via connected data lines.

Assume that a 7-segment display has four digital inputs for control. Then the following assignment of the inputs (x3, x2, x1, x0) for the seven segments (a, b, c, d, e, f, g) results:

All 128 possible combinations of a seven-segment display

Switching functions for the segments

The following switching functions in disjunctive normal form (DNF) result from the above logic table:

If you limit yourself to the decimal digits, the functions are simplified to:

Seven-segment driver blocks, which can only display the decimal digits 0 to 9, only contain the logic functions shown in the last section and display nonsensical characters if the hexadecimal values ​​A to F are present at the input.

For a while, eight-segment displays were also used, which allowed figures to be displayed more round. These were used, among other things, in the Sharp EL-8 pocket calculator .

Nine or eleven segment displays are rarer. These can also be used to represent letters. They have been used since the late 1970s, for example in chess computers such as the Chess Champion MK I by Skat Champion . There are also two vertical segments in the middle, plus two decimal points (top left and bottom right). There are also other variants with diagonal segments, in particular to better represent the Cyrillic И and the digits 1, 3 and 7, as well as other variants with special characters or to represent the Russian postcodes

The middle horizontal element of the seven-segment display is divided into two sub-segments, g 1 and g 2 . The two additional vertical segments in the horizontal center as well as the diagonal elements between the corners and the center are designated by h to m from top-left to bottom-right .

This display can be used to show other characters and symbols, e.g. B. the% sign.

In addition to the display with 14 segments, the upper and lower horizontal segments are also divided into a 1 and a 2 as well as d 1 and d 2 .

The period (as a punctuation mark, decimal or thousand separator) can also be displayed usefully with the sixteen-segment display by only activating segment d 1 . A separate dp segment is therefore not absolutely necessary.