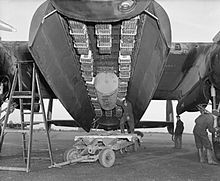 The incendiary bomb , and fire staff or electron Thermitstab , is on the magnesium - aluminum - alloy electron based firebomb that with thermite was ignited as the ignition charge. It was used during the Second World War as part of aerial warfare by the British Royal Air Force and the German Air Force . The British version was developed by Imperial Chemical Industries (ICI) in 1935/1936 on behalf of the British Ministry of Defense .

Duds of the same type - found in April 2010 at a depth of approx. 0.75 m in a Berlin allotment garden colony

As an example of the many different types and models, the English INC 4 LB ( incendiary , four pound ) incendiary bomb of 1.7 kg weight dropped in large quantities over Germany is described here. This stick incendiary bomb had a hexagonal body with a width of 41.3 mm (1 5/8 ") and a length of 545 mm (21 1/2"). Of this, about 200 mm was accounted for by the hexagonal tail made of thin sheet metal and 47 mm (1 7/8 ") for the steel head, which weighed about 0.6 kg. The actual incendiary device was the electron bomb cover . It was along its entire length A 25 mm bore filled with thermite pressed in . At its upper end, concealed by the tail unit, was the percussion fuse , which set the thermite filling on fire via a firing device. The delay was 25 seconds.

The stick incendiary bombs secured each other against unintentional triggering: A spring-loaded safety pin, which was pressed in by the neighboring bomb, blocked the detonator's needle. Only when dropped over the target area did the bombs separate from the bundle and thus became armed. Sometimes more than 100 pieces were transported together. 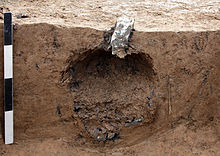 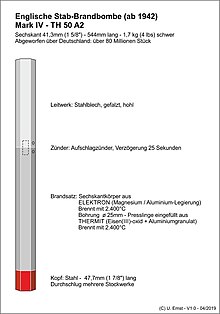 The burn time was about eight minutes; During this phase, a strong flash of flame emerged from the incendiary stick bomb and melted it into a burning, incandescent metal melt. It was not possible to extinguish the stick incendiary bomb directly with water, but the immediate vicinity of the bomb could be cooled with water or covered with sand, thus keeping the fire damage within limits. Due to the relatively insensitive detonator, defusing was unproblematic - handling and transport as well. They were hit on the floor and thrown away. Then it just burned out. Due to strong fluctuations in quality, there were up to 40% duds and self-extinguishers.

From 1942 there was a modification of this incendiary weapon, which was dropped together with the normal incendiary stick bombs: These modified incendiary sticks also contained a small explosive charge with a strong fragmentation effect, which exploded after the incendiary bomb was triggered (usually a few minutes). This was intended to keep the fire fighting and rescue teams at a distance from the firing weapon that was thrown, thus preventing early extinguishing.

Production of the first electron thermite rods began at ICI in October 1936. This first production lot, awarded by the UK Ministry of Defense, comprised 4.5 million pieces. At the beginning of the Second World War there were more than five million electron thermite rods available in Great Britain. In the course of the war more than 100 million units were produced, more than 80 million of which were dropped over German cities.

The electron thermite stick was used in densely built-up urban areas with the highest possible proportion of wooden structures. This incendiary bomb only developed its effect in conjunction with combustible materials, especially wood. The electron thermite rod was thus to be understood as a weapon of ignition. It developed the strongest effect in mass use against densely built-up medieval old towns.

When used in combination with a small number of explosive bombs and air mines that had been dropped shortly beforehand , a mass drop of electron thermite sticks could cause large-scale conflagrations. The air mines covered roofs and smashed windows. This enabled oxygen from the air to reach the source of the fire and prevented the stick bombs from falling from the sloping roofs onto the street. In addition, special high-explosive bombs with time fuses hindered the extinguishing and rescue work.

Under appropriate conditions of use, especially against settlements in a valley basin and when creating a funnel open in the direction of the wind, electron thermite rods were used on a large scale to create so-called fire storms .

Military use only made sense in a few, very limited exceptional cases, as this weapon was not suitable for combating point targets. They only offered a favorable cost-benefit ratio for the attacker in the case of area bombing , i.e. an operation against very large built-up targets.

Well-known uses of the electron thermite rods during the Second World War were the bombing of Coventry by the German Air Force and the air raids on Dresden , Chemnitz , Lübeck , Darmstadt , Kassel , Koblenz , Braunschweig , Dortmund , Wuppertal , Hildesheim , Pforzheim , Zweibrücken , Würzburg , Osnabrück , Hamburg and other German cities by the British Air Force . For example, more than 650,000 electron thermite rods were dropped over Dresden in a single attack.

The first thing to do in the USA was the AN-M50 stick bomb. This was a further development of the British stick incendiary bomb INC 4 LB MK II and was ready for use in 1941. This was followed by the AN-M52 , AN-M54 and AN-M126 versions . The latter remained in the US armed forces until the late 1960s. For the attacks on the Japanese cities with were napalm -filled incendiary bombs AN-M69 and AN-M74 developed. All American stick incendiary bombs were developed and produced by the Chemical Warfare Service (CWS). 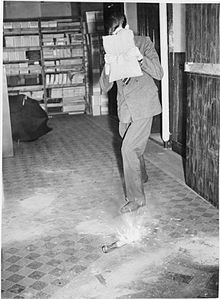 1944: Illustration of British instructions on how to extinguish a burning German 1 kg stick fire bomb with the help of a sandbag

On the German side, the first electron incendiary bomb was fully developed and ready for use in July 1918, but the first use in August 1918 is not said to have taken place on the direct orders of the German emperor. In 1937, the German Air Force first used (through the Condor Legion ) the B 1 E electron thermite stick incendiary bomb from IG Farben in Spain. In the further course of the Second World War, only the 35 cm long and 1.3 kg heavy type B 1.3 E with a steel headpiece was used.

Modifications of both variants were also used with a “disintegrator” explosive charge of 8 to 15 grams of PETN , which detonated between 30 seconds and five minutes after the incendiary bomb was triggered. The B 2 EZ was a further development : It consisted of a B 1.3 E , which had an additional explosive charge of 60 grams of PETN on its head. When the bomb hit, the actual incendiary bomb was detonated as usual and at the same time the additional warhead was repelled, which detonated after two, four or six minutes.