The State Oil Company of Azerbaijan Republic (SOCAR, Azerbaijani : Azərbaycan Respublikası Dövlət Neft Şirkəti , ARDNS; German : State Energy Company of the Republic of Azerbaijan ) is an Azerbaijani company with headquarters in Baku . The company operates in the oil and gas industry. Rövnag Abdullayev has been President of SOCAR since December 9, 2005.

The company was formed in September 1992 through the merger of the state oil companies Azerineft and Azneftkimiya . Via numerous subsidiaries and holdings, SOCAR is active in the production of crude oil and gas, the operation of the two oil refineries in Azerbaijan and the marketing of the extracted and processed products. SOCAR holds shares in the Baku-Tbilisi-Ceyhan , Baku-Supsa Pipeline and the South Caucasus Pipeline .

Today SOCAR consists of a large number of sales lines that cover the company's various business areas . SOCAR's fields of activity are the search, exploration and production of oil and gas fields in Azerbaijan as well as processing, refining and production, as well as the transport, delivery and sale of products on domestic and foreign markets. Under the management of SOCAR, three production areas, two oil refineries and a gas processing plant, an oil tanker fleet, a deep-sea platform factory, two trusts, an institution and 22 subcontractors act as legal entities.

According to a report by Handelszeitung, there are over 75,000 employees. 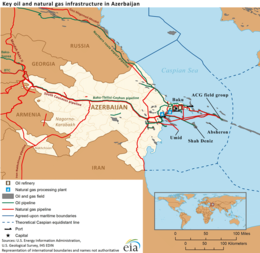 Oil and gas infrastructure in Azerbaijan

Around half of SOCAR's oil production comes from the Guneshli oil field (formerly “Field of April 28”), which is located east of the Abşeron Peninsula in the Caspian Sea . According to its own information, SOCAR has a total of 57 of its own oil and gas production sites, 18 of which are offshore . In addition, SOCAR acts as a local partner within international funding consortia active in Azerbaijan , for example for the AIOC . In 2012, SOCAR's export business covered around 95 percent of the state budget of Azerbaijan in the amount of around 18 billion US dollars.

SOCAR is often associated with the corruption rampant in Azerbaijan. In a 2011 survey of the anti-corruption practices of 44 oil companies by Transparency International , SOCAR came in last.

SOCAR is also active abroad. In general, SOCAR has representative offices in Georgia , Turkey , Romania , Austria , Switzerland , Kazakhstan , Great Britain , Iran , Germany and Ukraine , as well as trading companies in Switzerland, Singapore , Vietnam and Nigeria . In Switzerland, through which SOCAR conducts its export business, Socar Energy Switzerland appears with a modernized logo as the operator of the former Esso filling stations and as the main sponsor of the Montreux Jazz Festival . As of 2017, Socar Switzerland employed around 800 employees and 60 apprentices, the petrol station network comprised 155 stations as of 2016. In 2018 Socar operated a Migrolino at 60 filling stations in Switzerland and a nationwide network for hydrogen filling stations is to be implemented by 2023 . In neighboring Georgia, SOCAR Georgia Petroleum Ltd claims to be the largest oil importer.

SOCAR is also a sponsor of UEFA national team competitions, including the qualifying and final round matches for UEFA EURO 2016 .

Since September 2009 SOCAR has had a representative office in Frankfurt am Main .