Technics , like Panasonic and National, is one of the trade names or trademarks of the Japanese Panasonic Corporation based in Kadoma ( Osaka Prefecture ) , which was renamed Matsushita Electric Industrial Co. Ltd. until it was renamed in 2008 . was called. 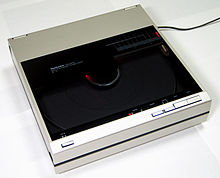 In 1965 the name was first used for a high quality compact loudspeaker ( Technics 1 ). In 1970 Matsushita introduced the Technics SP-10, the first commercial direct drive turntable drive as a built-in device that could be built into a housing or studio environment. A suitable tonearm had to be purchased and installed separately.

In 1973 the logo was created in its current form. In the following years, Technics was mainly used as a brand for hi-fi equipment and electronic musical instruments , while the Panasonic brand name was used for consumer electronics products in audio / video technology from video recorders , televisions to portable and small devices such as CD players , radio recorders , clock radios and the like, has been used.

Except for the disc jockey - equipment were from 2002 all the products that so far the Technics label contributed, with the aforementioned word-image brand Panasonic provided to all Panasonic products to market in the future under a common name.

In view of falling sales figures, the Technics brand was discontinued in 2010 - marked by an economic crisis in many industrialized countries. The Technics brand has been around again since 2014. Panasonic Corporation presented new devices at the International Radio Exhibition (IFA) 2014 in Berlin . They are available from 40 to 50 HiFi dealers in Germany and some HiFi dealers in Austria (not from electronics stores).

Technics became famous with the direct drive turntables of the SL-1xxx series; the best-known models were or are the manually operated Technics SL-1200MK2 or SL-1210MK2 , which came onto the market in 1972, and its successors M3D, MK5 and M5G. SL-1200 and SL-1210 only differ in color.

The tonearm construction of the Technics SL-1200MKx enables "integrated" pickups that can be mounted directly on the tonearm tube by means of a plug-in connection and union nut according to the SME standard without time-consuming adjustment .

The “1210” became legendary thanks to its patented quartz-controlled direct drive that accelerates to target speed within a quarter of a turn - a unique selling point compared to the other models in the SL-1xxx series. Even more than 20 years after its introduction, the drive is still regarded as the classic discotheque turntable, which is why it was advertised succinctly with the words: "To visit in your favorite discotheque". Due to its type designation, it is also simply referred to as “twelve-teens” among DJs .

At the end of October 2010, Panasonic announced the end of production after 38 years. This makes the device the longest-produced consumer electronics product, and it was entered in the Guinness Book of Records for this . In January 2016, the Technics brand announced the comeback of the Technics SL-1200 G for the 50th anniversary .

With the Technics SL-DZ 1200 there is a professional DJ CD player on offer that quotes the famous turntable with its name and design. This soon proved to be a flop. The CD player had to launch various defects and was in many magazines and various Internet forums panned . In addition, functions such as the SD card could only be used in conjunction with Panasonic memory cards , readers and software.

Even today, many musicians work with the instruments, which are popular for their excellent quality, workmanship and, last but not least, their sound properties, whether they are electric organs, digital pianos , digital ensembles or keyboards . Technics was one of the first manufacturers in the world to equip keyboards with hard drives as a storage medium .

A Germany-wide network of Technics music schools took care of the next generation of artists.

Panasonic / Matsushita withdrew from the keyboard market a few years ago; the last product was the Technics SX-KN 7000 , a high quality keyboard. This was decided by the Panasonic / Matsushita group and met with great incomprehension among friends of these instruments. The distribution was stopped except for the support .

The service and spare parts support for Technics instruments in Germany was taken over by Panasonic Deutschland GmbH. Panasonic made use of the extensive network of former authorized workshops for Technics products.

In the meantime Panasonic has handed over the complete support to the company Keilitz from Leipzig . All repairs to Technics musical instruments are now carried out by this company.