A tuner ( English tune to , vote, vote ') is the receiving part in television sets or radios .

Opened VHF / UHF tuner of a television set, antenna connection on the right

Transmitters transmit television and radio signals at the same time, but on different frequencies . The tuner is connected to the antenna input and selected, i. i.e., it filters out the desired signal. Often this is used exclusively to refer to the high-frequency part , which is usually implemented as a separate assembly due to the required high gain and the necessary freedom from interference. In practically all tuners commonly used today, as in a heterodyne receiver , this high frequency is converted into an intermediate frequency independent of the transmitter frequency via a mixer .

In classic television technology, this is where the tuner's responsibility ends. An amplifier component is then connected downstream of the tuner . The combination of tuner and amplifier is referred to as a receiver , the actual radio receiving part.

The term tuner is used for:

Types according to signal

There are different tuners for different signals: 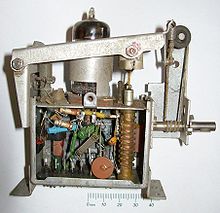 The predecessor of the AM tuner consisted of a set of coils with a wave switch for the range selection of radio receivers for the long, medium and short wave range (AM, short for amplitude modulation ). The typical solution contained one oscillator circuit and only one pre-circuit. The two circles were tuned with a two-way variable capacitor . Later it was possible to produce capacitance diodes with a sufficiently high capacity and quality so that the double rotary capacitor could be omitted.

For the VHF area, there were temporarily additional devices that extended a normal LMK radio to a VHF receiver. Because of the frequency modulation used in the VHF range, these additional devices had to contain the IF amplifier and the demodulator. The radio only served as an audio amplifier with loudspeaker.

The entire assembly of pre-circuit, pre-stage, oscillator circuit and mixer, including the first IF filter, was also combined into the VHF tuner in later, built-in assemblies. The first solutions often included inductive tuning ( variometer ), in which two coil cores were moved by one axis using cables. Multiple rotary capacitors were used later.

Combination tuners for radio can also have two variable capacitor pairs of different capacities on a common shaft for LMK (AM) on the one hand and VHF on the other. With the advent of varactor diodes, it was possible to implement the AFC function electronically and later also the VHF tuning.

For television receivers only tuners for VHF ( VHF band I and VHF band III ) were initially required. They were built in the shape of the drum channel selector. The coils (and capacitors) required for the respective receiving channel (channels 1 to 12) were located as so-called channel strips on the circumference of a drum. These sewer strips were adjusted during manufacture or in the workshop. The user had to fine-tune the oscillator on each channel. For this purpose, an eccentric disk consisting of a dielectric was twisted, which lay between an insulated capacitor surface and a sheet metal angle on the housing, the effective surface of which was thereby changed. Often individual channel strips were also not equipped. In the early GDR, for example, this applied to the “West” channels. There were also television receivers with a tuner that only allowed switching between two channels (Alex).

With the development of the UHF range, UHF tuners and UHF converters were built. The difference was that the tuner was built into the receiver and emitted the intermediate frequency, while the converter was an additional device that converted the received signal into a free channel (channel 3). The devices had multiple variable capacitors, later tuners then capacitance diodes for tuning.

The first electronically tunable tuners with then novel capacitance diodes go back to work from the 1960s by Karl-Heinz Kupfer at Philips . This enabled television sets to be built that could be completely controlled via a remote control, including the station setting.

Nowadays, TV tuner assemblies are smaller than a box of cigarettes or even a matchbox and cost a few euros to manufacture. There are various manufacturers for the tuner modules.

Today's digital tuners can largely do without inductive and tuning components thanks to digital signal processing (DSP) and also manage demodulation digitally. Other functions that are simplified by this are automatic station search, numerical input of the reception frequency or the automatic assignment of the program slots with receivable stations.

Tuner as a device

The term tuner was later transferred to independent devices for radio reception, at the output of which the demodulated LF signal is emitted at line level . The tuner and the amplifier (possibly contained in the turntable) are designed to match each other and, together with the loudspeaker boxes, result in a complete radio receiver.

In the field of broadcast technology, high-quality devices in the manner of a tuner are called ball receivers . TV ball receivers were used together with small transmitters to supply areas (valleys) with poor reception due to shading. See also converter (radio technology) . Of course, the ball receiver contains a tuner assembly .