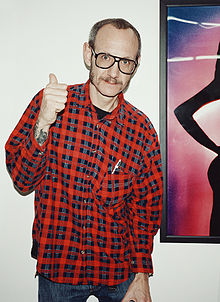 Richardson is the son of fashion photographer Bob Richardson . Terry's mother, Norma, a stylist and dancer, always had her son with her when she worked. Terry Richardson got to know the fashion world early on in Paris and London . Five years after his birth, his father, Bob Richardson, divorced his wife. Terry moved to Woodstock with his mother , where she met her second husband. When he was eleven years old, she had a serious car accident and was in a coma for a month. She survived, but part of her brain was irreparably damaged, so she had to earn a living for herself and her son from social welfare. In his youth, Richardson played in a punk band called Doggy Style , later Signal Street Alcoholics , but never made any records. While touring with his band, he began taking photos.

In March 2010, Richardson hit the headlines when supermodel Rie Rasmussen accused him of sexually exploiting young female models after posting a photo of her in his book TerryWorld . Rasmussen said that Richardson was using his power as a scandal photographer to get young women to take nude photos. This was followed, partly anonymously, by allegations from other people via partly feminist blogs. Richardson had previously admitted that he sometimes had sex with models after they were photographed, but indicated that the models would have consented. The Guardian quoted him as saying, "I don't think I'm a sex addict, but I have problems." The allegations have continued since then and were repeatedly dismissed by him in June 2014.

On October 22, 2017, in the wake of the Weinstein scandal surrounding US film producer Harvey Weinstein , the Sunday Times asked why Richardson is still being celebrated in the fashion scene, even though many women have accused him of sexual abuse for years. According to the Daily Telegraph , the vice-president of Condé Nast Verlag then ordered an internal email to end the collaboration with Richardson immediately.

He has worked for fashion brands such as Sisley , Gucci , Supreme , Levi's , Hugo Boss , Anna Molinari and Baby Phat , as well as for the magazines Vogue , Vice , Harper's Bazaar , The Face , Dazed & Confused and GQ . Richardson's trademark is an amateurish, very raw and direct style.