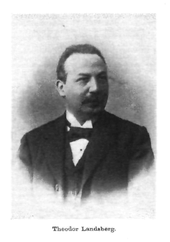 Theodor Landsberg (born August 8, 1847 in Hildesheim , † October 20, 1915 in Berlin ) was a German civil engineer and university professor . He made significant contributions in the field of structural engineering and iron bridge construction.

Theodor Landsberg was born in Hildesheim as a member of a long-established Jewish family. His father, Meyer Landsberg (* May 1, 1810 in Meseritz; † May 20, 1870 in Hildesheim), was a rabbi from 1846 until his death and headed the Hildesheim regional rabbinate , based there.

In 1878 his son, the architect Max Landsberg, was born.

Theodor Landsberg's younger brother, Dr. Max Landsberg , like his father, became a rabbi in 1870. In 1871 Max Landsberg was called to Rochester, NY and later elected Chief Rabbi at the Bereth Kodeth Temple (Temple B'rith Kodesh) there.

Landsberg attended the Josephinum Hildesheim grammar school until 1865 . After graduating from high school, Theodor Landsberg studied from 1865 to 1869 at the Polytechnic School in Hanover with Karl Karmarsch , architect Ernst Grelle, August Ritter , Moritz Rühlmann , August von Kaven and others

In May 1870 he passed his examination to become a government building supervisor ( trainee lawyer ) in Hanover .

After completing his studies, he first returned to the engineering office of the railway entrepreneur Bethel Henry Strousberg in Berlin, where he had already been busy planning iron bridges during his studies. Because of the outbreak of the Franco-Prussian War , he was unable to implement his plan to work as assistant to his teacher August von Kaven at the Royal Rhenish-Westphalian Polytechnic School in Aachen, which was founded in 1870 . Rather, Landsberg joined the reserve battalion of the Guards Fusilier Regiment as a war volunteer and took part in the war on foot with the Guards regiment .

In August 1871 he joined the Kaiserliche Werft in Kiel for further training ; In 1872 he was involved in the construction of the Leipzig-Zeitzer Railway , a 16 km long route with several stations and stops.

After Landsberg had successfully passed his second state examination to become a government architect ( Assessor ) in May 1876 , he worked as an unskilled worker in the Prussian Ministry of Trade and Industry and Public Services . In the service of the city of Berlin he was involved in the preparatory work from 1878 and later in 1880 in the construction management of the Marschall Bridge.

In 1880 Theodor Landsberg was appointed professor to the chair for structural engineering and bridge construction at the Technical University of Darmstadt . His practical experience and his scientific talent were thus recognized.

“His students appreciated the clear, understandable presentation and his ability to present the brittle material of statics in a clear and easily comprehensible manner. His lecture on bridge construction was also clear and convincing. "

In his many individual publications, especially in the Zentralblatt der Bauverwaltung , he emerged in the field of the theory of secondary stresses in frameworks. From 1899 to 1901 he was also the rector of this university. In 1900 he turned down an offer at the Technical University of Charlottenburg .

Landsberg did not only devote himself to the subject of iron structures in building construction in the lectures, but also in a large number of scientific publications. Landsberg's collaboration on the handbook of engineering sciences was particularly fruitful. After Theodor Schäffer , his predecessor at the chair for structural engineering and bridge construction, and Eduard Sonne, Landsberg took over the editing of the second part of the publication The Bridge Construction and wrote many parts himself. His high reputation, which Landsberg enjoyed especially in bridge construction , led to the repeated assumption of the office of judge.

Since Theodor Landsberg believed that he could no longer fully pursue his profession due to a serious internal suffering, he applied for his retirement at the age of 60. On April 1, 1908, his application was granted. Had him the Technical University of Darmstadt before the completion of his 60th birthday, "in recognition of his outstanding scientific and literary achievements in the field of statics and Eisenbaues as well as in special appreciation of his many years of successful teaching" the honorary doctorate (as Dr.-Ing. E.h.) awarded.

Landsberg spent his retirement in Berlin. He died at the age of 68 in Berlin-Wilmersdorf. He was married to Betty Niemann.