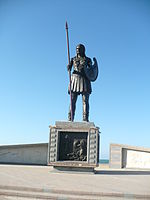 The coastal city of Samsun in the Turkish Black Sea region

The Thermodon ( ancient Greek Θερμώδων Thermṓdōn ) is a river in Greek mythology , on whose banks the Amazons lived. The current Turkish name is Terme Çayı . The river flows into the Black Sea about 50 km east of the coastal city of Samsun . As a river god, Thermodon was the son of Oceanus and Thetis . At the command of Zeus he took on Sinope, who was being pursued by the father of gods .

In ancient Greek myths, the Thermodon was not like any other river on earth: Rising from a single source deep in the mountains, it soon divided into many smaller arms and flowed into the sea in 96 mouths. The Amazons should live at the widest mouth. The area around the river is still pretty self-contained, surrounded by unruly mountains in the south and east. To the west, the wide Yeşilırmak River forms a natural border. The coastal area in the north borders the Black Sea; the heavily swamped area forms a natural obstacle for possible enemies.

In the Argonauts legend, the heroes on the way to Colchis do not dare to dock in Asia Minor at the mouth of the Thermodon. The Greek historian Strabo reported towards the end of the 1st century BC. In his geography , one of the many foundations of the Amazons was the city of Themiskyra on the Thermodon River in the Pontos area in northeast Asia Minor. The historian Pliny and the poet Apollonios of Rhodes mention an "Amazon mountain" ( Amazonius mons ), at the foot of which the Thermodon flowed. In the 19th century, a mountain in the area was called "Mason Dagh".